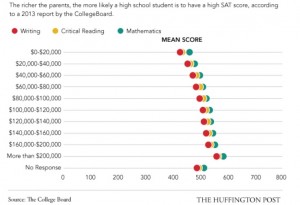 David Coleman’s announced changes to the College Board’s SATs earlier this week reverberated throughout the country yesterday.  Besides describing the changes to the tests:  Coleman was quoted as saying that:

“It is time to admit that the SAT and ACT have become disconnected from the work of our high schools,” he said. “Too many feel that the prevalence of test prep and expensive coaching reinforces privilege rather than merit.

“It is time for the College Board to say in a clear voice that the culture and practice of costly test preparation … drives the perception of inequality and injustice in our country,” Coleman said. “It may not be our fault but it is our problem.”

The Huffington Post in an article this morning provides a graph derived from a 2013 College Board report which illustrates the high correlation of SAT scores to family income.  For example, the data show 130 points difference in the mean scores in critical reading; 124 points in mathematics; and 144 points in writing between students at the lowest income levels versus those in the highest income levels.  The article comments:

That stark correlation between family income level and SAT score underscores one of the major criticisms of the test: that as previously constructed, it gave wealthy parents the ability to pay for expensive test preparation courses in order to better prepare their children for the test, an advantage unavailable to many low-income youths.’

While this is a step in the right direction for the College Board, it is naïve to think that parents of means will not figure out a way to give their children an advantage with the newly designed test.