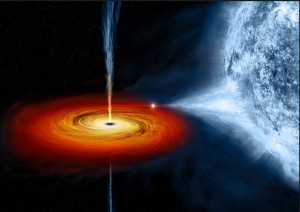 The journal, Nature, has an article based on a paper written by Stephen Hawking’s that fundamentally changes our view of a black hole.  As stated in the article:

“Most physicists foolhardy enough to write a paper claiming that “there are no black holes” — at least not in the sense we usually imagine — would probably be dismissed as cranks. But when the call to redefine these cosmic crunchers comes from Stephen Hawking, it’s worth taking notice. In a paper posted online, the physicist, based at the University of Cambridge, UK, and one of the creators of modern black-hole theory, does away with the notion of an event horizon, the invisible boundary thought to shroud every black hole, beyond which nothing, not even light, can escape.

“There is no escape from a black hole in classical theory, but quantum theory enables energy and information to escape.”

In its stead, Hawking’s radical proposal is a much more benign “apparent horizon”, which only temporarily holds matter and energy prisoner before eventually releasing them, albeit in a more garbled form.  “There is no escape from a black hole in classical theory,” Hawking told Nature. Quantum theory, however, “enables energy and information to escape from a black hole”. A full explanation of the process, the physicist admits, would require a theory that successfully merges gravity with the other fundamental forces of nature. But that is a goal that has eluded physicists for nearly a century. “The correct treatment,” Hawking says, “remains a mystery.”