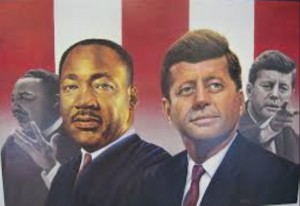 On this day we show our respect for Dr. Martin Luther King, Jr, a man of peace who fifty years ago ignited our country to attempt to deal with its racial problems. In November 2013, we remembered the 50th anniversary of the assassination of President John F. Kennedy.  The media are reporting that an audiotape of an interview with the Martin Luther King, Jr., discovered in a Tennessee attic, sheds new light on a famous phone call John F. Kennedy made to King’s wife more than 50 years ago.  As reported in The Huffington Post:

“Historians generally agree that Kennedy’s phone call to Coretta Scott King expressing concern over her husband’s arrest in October 1960 – and Robert Kennedy’s work behind the scenes to get King released – helped JFK win the White House that fall.

King himself, while appreciative, wasn’t as quick to credit the Kennedys alone with getting him out of jail, according to a previously unreleased portion of the interview with the civil rights leader days after Kennedy’s election.

“The Kennedy family did have some part … in the release,” King says in the recording, which was discovered in 2012. “But I must make it clear that many other forces worked to bring it about also.”

A copy of the original recording will be played for visitors at the National Civil Rights Museum in Memphis for a “King Day” event on Jan. 20.

King was arrested a few weeks before the presidential election at an Atlanta sit-in. Charges were dropped, but King was held for allegedly violating probation for an earlier traffic offense and transferred to the Georgia State Prison in Reidsville, Ga.

The Kennedys intervened, and King was released. Their intervention won the support of black voters who helped give Kennedy the winning edge in several key states.

Despite their help, however, King was careful not to give them too much credit.

“I think Dr. King was aware in the tape that he probably did more for John F. Kennedy than perhaps John F. Kennedy did for him,” said Keya Morgan, a New York-based collector and expert on historical artifacts. Morgan acquired the reel-to-reel audiotape from Chattanooga, Tenn., resident Stephon Tull, who discovered it while cleaning out his father’s attic.”