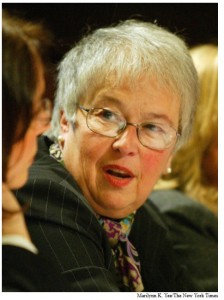 “Mayor-elect Bill de Blasio will appoint Carmen Fariña, a former top official of the New York City Education Department, as the next schools chancellor, a person with knowledge of the decision said on Sunday.

Ms. Fariña, 70, the daughter of immigrants from Spain who fled the Franco regime, is a veteran of the city’s school system, having served as a teacher, principal and superintendent of a Brooklyn school district. She retired as a deputy chancellor in 2006.

The choice reflected Mr. de Blasio’s desire to depart radically from the educational policies of Mayor Michael R. Bloomberg, including his emphasis on data and his policy of shuttering low-performing schools. The choice is also in keeping with Mr. de Blasio’s pattern of appointing people with deep governmental experience.

As a principal and superintendent, Ms. Fariña gained a reputation as a stern manager. She worked briefly as a top official in the Education Department early in the Bloomberg administration, overseeing teaching and learning, but departed amid philosophical differences.

Last year, when he was a Democrat in a crowded field of mayoral contenders, Mr. de Blasio said that candidates for chancellor should receive “serious public screening,” criticizing the way Mr. Bloomberg had appointed Cathleen P. Black, a publishing executive, as chancellor in 2010. She resigned after three months.

As the leader of the nation’s largest school district, with 1 million students, Ms. Fariña will also face a host of thorny issues, including calming tensions over a new set of academic standards, rolling out a plan to charge rent to charter schools and negotiating a contract with the city’s teachers’ union, which is demanding billions of dollars in retroactive raises.

Mr. de Blasio has spoken often about his desire to break with several hallmarks of the Bloomberg era, including its support of charter schools. He has said he will decrease the emphasis on standardized testing and give more input to parents.

Ms. Fariña shares Mr. de Blasio’s skepticism of standardized testing and his focus on early education. As chancellor, she will help shape his proposal to expand access to preschool and after-school programs.”

The appointment of Farina would be a very good move for the NYC schools and its children.  Michael Bloomberg accomplished many things during his twelve years as mayor but his appointments of Joel Klein and Cathie Black, neither one of whom had any public school experience, were problematic at best.