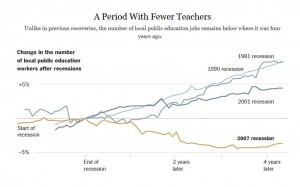 The New York Times has a featured article today highlighting the fact that many school districts have not recovered from the Great Recession of 2008.  By examining the number of school employees and especially teachers, data show that across the country, public schools employ about 250,000 fewer people than before the recession, according to figures from the Labor Department. Enrollment in public schools, meanwhile, has increased by more than 800,000 students. To maintain prerecession staffing ratios, public school employment should have actually grown by about 132,000 jobs in the past four years.  The article goes on to provide cases of specific school districts where class size has increased to 30 or more students, where students are sitting in hallways, and where inclusive classrooms (mixed general and special education students that supposed to have two teachers) have but one teacher.

“In a social studies class at Scott Middle School (Pennsylvania), Keith Lilienfeld tries to keep control of a class of 25 students, 10 who need special education services, four who know little or no English and others who need more challenging work than he has time to give.

“I’m up there putting out fires like you wouldn’t believe,” said Mr. Lilienfeld, who used to have the help of two or three classroom aides. “There’s only one of me, and there’s a need for about five of me in there.”

This is travesty perpetrated in part because of the funding system for public education in this country but also because  policy makers at federal and state levels have fixated their education reform efforts almost entirely on test scores, global competition, and curriculum.