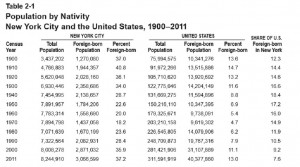 New York City has the largest immigrant population of any city in the world.  There are more foreign-born New Yorkers than there are people living in Chicago, or roughly the same as the populations of Philadelphia and Phoenix combined.   As reported in The Huffington Post:

“In just 30 years, what was a city with a population of primarily European origins has now become a place with no dominant race/ethnic or nationality group,” reads the Department of City Planning report, The Newest New Yorkers, which uses data from an American Community Survey conducted between 2007 and 2011. “Indeed, New York’s unmatched diversity epitomizes the world city.”

The report is over 300 pages long and contains a trove of tables and charts on New York City demographics.

Well worth a look. 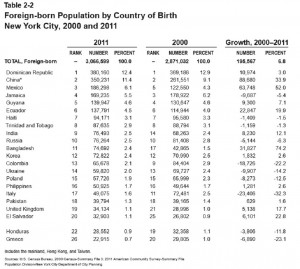