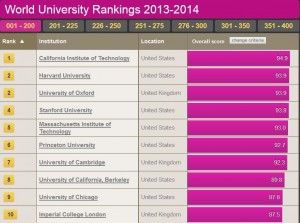 The (British) Times Higher Education World University Rankings for 2013-14 were released earlier this week.  In collaboration with Thomson Reuters, university performance was measured for 13 performance indicators grouped into five areas:

The rankings for this year were dominated by the United States and Britain, which together held the top 13 spots and more than half the top 200.  The United States had 77 of the top 200 and California Institute of Technology (CalTech) took the top spot for the second year in a row.

While I am not a fan of rankings, I hope our education policy makers, who fixate on numbers to criticize American education, realize that compared to the rest of the world, many of our colleges and universities are respected and admired.