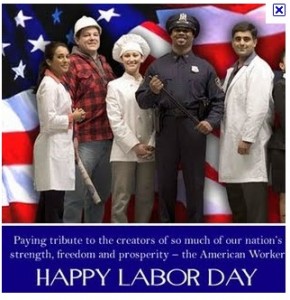 New York Times columnist Paul Krugman comments on the history of Labor Day and what it has come to mean in 2013.  On the history, he reminds us that in 1894, Pullman workers, facing wage cuts in the wake of a financial crisis, went on strike — and President Grover Cleveland deployed 12,000 soldiers to break the union. He succeeded, but “using armed force to protect the interests of property was so blatant that even the Gilded Age was shocked”. So Congress, in an attempt at appeasement, unanimously passed legislation symbolically honoring the nation’s workers.

“what’s unimaginable now is that Congress would unanimously offer even an empty gesture of support for workers’ dignity. For the fact is that many of today’s politicians can’t even bring themselves to fake respect for ordinary working Americans.”

“Consider, for example, how Eric Cantor, the House majority leader, marked Labor Day last year: with a Twitter post declaring “Today, we celebrate those who have taken a risk, worked hard, built a business and earned their own success.” Yep, he saw Labor Day as an occasion to honor business owners.

More broadly, consider the ever-widening definition of those whom conservatives consider parasites. Time was when their ire was directed at bums on welfare. But even at the program’s peak, the number of Americans on “welfare” — Aid to Families With Dependent Children — never exceeded about 5 percent of the population. And that program’s far less generous successor, Temporary Assistance for Needy Families, reaches less than 2 percent of Americans.

Yet even as the number of Americans on what we used to consider welfare has declined, the number of citizens the right considers “takers” rather than “makers” — people of whom Mitt Romney complained, “I’ll never convince them they should take personal responsibility and care for their lives” — has exploded, to encompass almost half the population. And the great majority of this newly defined army of moochers consists of working families…”

On this day, we honor our workers, and remember that America was built on their effort and toil.