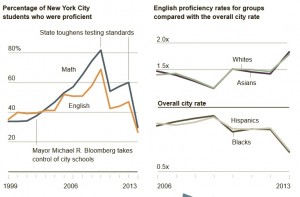 The New York media are ablaze with the release of the results of NYS standardized tests based on the new Common Core curriculum.  Only 31% of New York state students in grades 3-8 passed the 2013 math and reading tests, down from 65% in math and 55% in English in 2012 on different tests. And just under 30% of New York City students were proficient in math and 26% in reading – a drop by more than half of city students making the grade in each subject compared to 2012.

Even with the drop in scores, New York City still outperformed the state’s other large school districts — in Rochester, for example, only 5 percent of students passed in reading and math. And despite its large number of disadvantaged students, New York City almost matched the state’s performance as a whole.

These results were expected but the decline is still disheartening to students, their families, teachers, and school administrators.  Unfortunately it will be the educators in the schools who will have to explain the issue of the new Core Curriculum and the fact that because it was rushed into New York public schools, many districts including New York City were not prepared to develop materials or do the teacher training needed to teach the new curriculum.

Our federal and state education policy makers will try to explain away these results as setting a higher bar or as establishing a new baseline for the future.  However, if these same individuals were not in such a rush to implement their agendas, many of our children and their families would have been spared the anguish of “failing” these tests.  Shame on Arne Duncan for forcing New York State to implement these standards so quickly.  Shame on John King for caving into the pressure exerted on him by Arne Duncan.  And shame on New York City education policy makers for participating in this fiasco of poor planning and implementation.