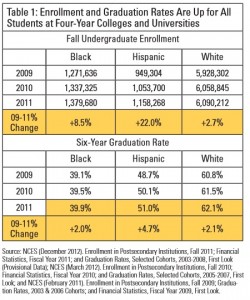 The graduation gap between minority and white college students is slowly narrowing according to a new report by the Education Trust.  The report, based on data from the U.S. Department of Education, noted that from 2009 to 2011, the number of Hispanic undergraduates at four-year colleges shot up 22 percent, while enrollment grew 8.5 percent for black students and 2.7 percent for white students. Six-year graduation rates for all three groups improved: by 4.7 percent for Hispanic students and by 2 percent for black and white students.  The report states:

“Making use of new data now publicly available on the College Results Online (CRO) website, The Education Trust finds some encouraging news for those concerned about broadening access and

success in the nation’s four-year colleges: Over the past three years,  the number of black and Latino undergraduates enrolled in four-year colleges grew far faster than the enrollment of white students, and success rates for both groups also increased. Certainly, more improvement is necessary. Success rates (i.e., six-year graduation rates) for both groups still lag those of white students.

And even with the recent increases, the current graduation rate for black students is still below their rate in 2006 by 2.2 percentage points. But if more colleges and universities can match the improvement patterns seen at the leading institutions profiled in this brief, closing the college completion gap is within our reach.”

“Colleges that decide student success is the number-one priority have been able to move the needle even with decreasing levels of state support,” the report’s author, Joseph Yeado, a higher education research and policy analyst for the Education Trust.

The report specifically mentions several colleges (SUNY Stonybrook, Florida State University, University of North Carolina- Greensboro) that are doing an excellent job of narrowing the graduation gap and several  (Michigan State, Louisiana State, University of Akron) that are not.