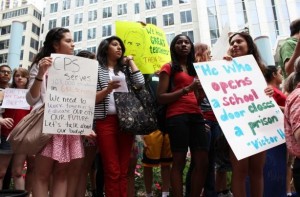 Mayor Rahm Emanuel’s recent proposal to fund an arena for DePaul University incurred the ire of more than 150 parents, teachers and students who marched in protest in downtown Chicago.  As reported in DNAinfo Chicago and other media:

“We have a system that’s failing in many directions … and $55 million is going to fund a stadium at a private, religious university?” said Wendy Katten, the Raise Your Hand director who helped organize Friday’s protest.

“The audacity of the city to announce [this] as they’re closing schools and slashing school budgets — we need to change the priorities of this city,” Katten said.

Protestors met at the James Thompson Center, 100 W. Randolph St., for a brief rally before marching to CPS Headquarters, 125 S. Clark St., and on to the DePaul student center, 1 E. Jackson Blvd.

Demonstrators flooded the first floor of the university center and were quickly asked to leave for trespassing on private property.

“Arrest me. Arrest me,” Katten said, as two police officers escorted her from the building.

No arrests were made. Several DePaul alumni among the protestors were allowed to re-enter the building and present the university with a basketball, which had the names of 50 closing schools scribbled across it.

“These school closings destabilize the community, and the mayor doesn’t seem to care,” said Sonia Ott, a 25-year teaching veteran who joined the protest. “I don’t trust the government right now.”

Students from Whitney Young, the Near West Side school that recently proposed charging students $500 to make up for the nearly $1 million in proposed cuts, stormed the Thompson Center plaza with homemade signs.

“I think that’s absolutely crazy,” Natalie Woods, 15, said of the proposal. “A public education is supposed to be free. We have a right to a free education. Not everyone can afford $500.”

Crazy indeed!   Priorities are being set at all levels of our government (federal, state and city) that can only be characterized as an assault on public education.