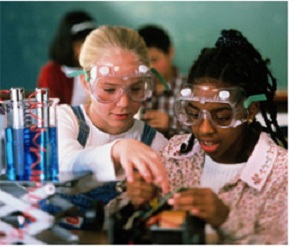 Educators unveiled new guidelines yesterday  that call for sweeping changes in the way science is taught in the United States — including recommendations that climate change and evolution be taught as early as middle school. The guidelines, known as the Next Generation Science Standards, are the first broad national recommendations for science instruction since 1996. They were developed by a consortium of 26 state governments and several groups representing scientists and teachers.  A New York Times article describes the standards as:

“The guidelines take a firm stand that children must learn about evolution, the central organizing idea in the biological sciences for more than a century, but one that still provokes a backlash among some religious conservatives.

States are not required to adopt them, but 26 states have committed to seriously considering the guidelines. They include Arizona, Arkansas, California, Iowa, Kansas and New York. Other states could also adopt the standards.

Educators involved in drawing them up said the guidelines were intended to combat widespread scientific ignorance, to standardize teaching among states, and to raise the number of high school graduates who choose scientific and technical majors in college, a critical issue for the country’s economic future.

The focus would be helping students become more intelligent science consumers by learning how scientific work is done: how ideas are developed and tested, what counts as strong or weak evidence, and how insights from many disciplines fit together into a coherent picture of the world.

Leaders of the effort said that teachers may well wind up covering fewer subjects, but digging more deeply into the ones they do cover. In some cases, traditional classes like biology and chemistry may disappear entirely from high schools, replaced by courses that use a case-study method to teach science in a more holistic way.

In many respects, the standards are meant to do for science what a separate set of guidelines known as the Common Core is supposed to do for English and mathematics: impose and raise standards, with a focus on critical thinking and primary investigation. To date, 45 states and Washington have adopted the Common Core standards.”

The standards also call for more hands-on science work which is desperately needed in many schools. Educators said they foresaw more use of real-world examples, like taking students to a farm or fish hatchery — perhaps repeatedly, over the course of years — to help them learn principles from biology, chemistry and physics. This is a win for K-12 education in this country.