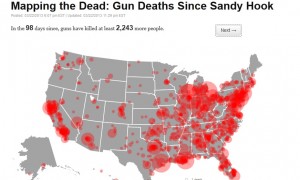 It has been 98 days since the tragedy at the Sandy Hook Elementary School when a lone gun man killed twenty students, ages 6 and 7, and six adults.  As the nation mourned a little more than three months ago,  politicians around the country expressed outrage and vowed to do something to protect people from guns.  This past week, the US Senate watered down even the meekest of attempts to reign in the proliferation of guns when it eliminated the ban on assault weapons in a proposed bill.

The Huffington Post in an effort to draw attention to the fact that guns kill people, has an interactive website that traces the deaths of Americans by guns across the United States.  At the website, the image above is interactive and visitors can see exactly where and when people were killed in the different parts of the country since the Sand Hook tragedy.