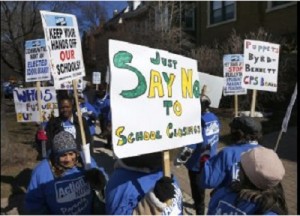 An announcement was made yesterday that Chicago would close 54 public school in order to address substantial funding deficits in the education system.  The New York Times reported:

“The district said that it would save $560 million over 10 years by reducing investment in the closed buildings and cut annual operating costs by $43 million.

The closings represent about 8 percent of the 681 public schools in Chicago, the third-largest school district in the country. More than 400,000 students are enrolled in public schools, a large majority black or Hispanic and from low-income families.

… The final decision came just two weeks after a state commission in Pennsylvania announced a decision to close 23 schools in Philadelphia. Districts in Detroit, Newark and Washington have also closed schools in recent years.

In Chicago, where about 100 schools have already been closed since 2001, Ms. Byrd-Bennett has said that the district needs to reduce a $1 billion deficit. “By consolidating these schools, we can focus on safely getting every child into a better performing school close to their home,” she said Thursday.”

Response to this decision was quick and forceful:

“Union leaders and parent activists protested the decision, saying that closings can undermine neighborhoods and cause safety problems for students who may as a result have to cross gang lines.

“We’re going to have abandoned buildings,” said Karen Lewis, president of the Chicago Teachers Union, in an interview. “They destabilize the neighborhoods around them.”

“They are moving people around on spreadsheets,” Ms. Lewis added. “And children are not spreadsheets.”

Some parents worry that their children will not get the attention they need once schools are consolidated and class sizes expand.”

A sad situation for American education and the country in general.   Just think what we could have done for Chicago’s children with a small fraction of the trillions of the dollars spent on the Iraq War during the past ten years.