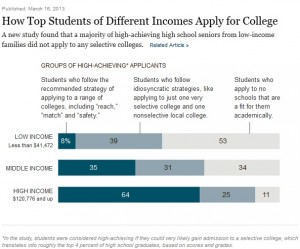 The New York Times has a featured article that examines the results of SAT scores, income and attendance at selective colleges.  Referring to a new analysis conducted by conducted by Caroline M. Hoxby of Stanford and Christopher Avery of Harvard, the article comments:

“Most low-income students who have top test scores and grades do not even apply to the nation’s best colleges, according to an analysis of every high school student who took the SAT in a recent year.

The pattern contributes to widening economic inequality and low levels of mobility in this country, economists say, because college graduates earn so much more on average than nongraduates do. Low-income students who excel in high school often do not graduate from the less selective colleges they attend.

Only 34 percent of high-achieving high school seniors in the bottom fourth of income distribution attended any one of the country’s 238 most selective colleges, according to  Caroline M. Hoxby of Stanford and Christopher Avery of Harvard, two longtime education researchers. Among top students in the highest income quartile, that figure was 78 percent.

The findings underscore that elite public and private colleges, despite a stated desire to recruit an economically diverse group of students, have largely failed to do so…”

Dr. Hoxby and Dr . Avery, both economists, compared the current approach of colleges to looking under a streetlight for a lost key. The institutions continue to focus their recruiting efforts on a small subset of high schools in cities like Boston, New York and Los Angeles that have strong low-income students.

The researchers defined high-achieving students as those very likely to gain admission to a selective college, which translated into roughly the top 4 percent nationwide. Students needed to have at least an A-minus average and a score in the top 10 percent among students who took the SAT or the ACT.”

In sum, this is troublesome commentary on counseling and recruitment policies at some of our selective colleges but maybe not unexpected.  For instance, while the article refers to the difficulty of getting financial aid information to students, it does not comment on cultural issues and the desire of many students to stay in the familiarity of neighborhoods and small towns where they feel the support of family and friends.