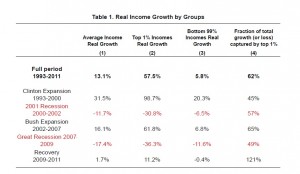 The New York Times is reporting that incomes rose more than 11 percent for the top 1 percent of earners during the 2009-2011 economic recovery, but not at all for everybody else, according to new data.

The disparity between top earners and everybody else can be attributed, in part, to differences in how the two groups make their money. The wealthy have benefited from a four-year boom in the stock market, while high rates of unemployment have continued to hold down the income of wage earners.

“We have in the middle basically three decades of problems compounded by high unemployment,” said Lawrence Mishel of the Economic Policy Institute, a left-of-center research group in Washington. “That high unemployment we know depresses wage growth throughout the wage scale, but more so for the bottom than the middle and the middle than the top.”

In his analysis, Mr. Saez said he saw no reason that the trend would reverse for 2012, which has not yet been analyzed. For that year, the “top 1 percent income will likely surge, due to booming stock prices, as well as retiming of income to avoid the higher 2013 top tax rates,” Mr. Saez wrote, referring to income tax increases for the wealthy that were passed by Congress in January. The incomes of the other “99 percent will likely grow much more modestly,” he said.”

In sum:  the rich get richer and the poor get poorer!