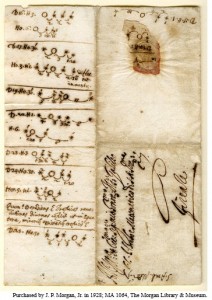 The Morgan Library and Museum in Manhattan has a beautifully preserved relic of that scientific triumph: the scrap of an envelope on which Galileo, in 1611, tracked the shifting positions of the Jovian moons. He had published his findings about the moons the year before in “The Starry Messenger,” and he was working, night after night, to better define the periods of the moons’ orbits. In his (literally!) back-of-the-envelope jottings and little pictures, one can sense a great mind puzzling out a perplexing story.

The New York Times comments on Galileo and his discovery:

“At first, Galileo thought he was seeing stars. But watching them move in relation to Jupiter, he figured out what they really were — an epiphany that began to upend the given view of the universe. Here was a celestial body with other celestial bodies circling it. For a biblical cosmology that placed Earth at the center of all that moved, the implications would prove devastating…Galileo’s achievement was the end of geocentrism, but it was hardly the end of ignorance and magical thinking. When obstinacy places reason under siege, as it does to this day — when fundamentalism defames biological science in the classroom, or the politics of denial prevent action to deal with a changing climate, it helps to recall our debt to a man who set a different example more than 400 years ago. It took just a wooden tube and some polished lenses, a critical and inquisitive mind, and four points of light that didn’t behave the way they were supposed to.”

If you have not visited the Morgan Library and Museum, it is a wonderfully intimate place on Madison Avenue and 36th Street just down the block from the CUNY Graduate Center.