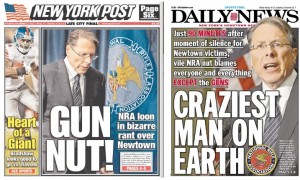 As the last of the innocents were buried yesterday in Newtown, Connecticut, the media backlash against the NRA and its spokesman, Wayne LaPierre was furious.  At a press conference on Friday, LaPierre blamed everybody except his own organization for the proliferation of guns in this country that resulted in the tragedy at Sandy Hook Elementary School.

The New York Daily News front page referred to LaPierre as the “craziest man on Earth”. The New York Post, a newspaper generally friendly to the NRA, had a front-page referring to him as a “gun nut” and a “loon”.

Perhaps the most pointed condemnation came from Lawrence O’Donnell on his MSNBC program, calling LaPierre a “lobbyist for mass murderers” and denouncing him for attempting to take issue with the media’s coverage of the slaughter in Connecticut.