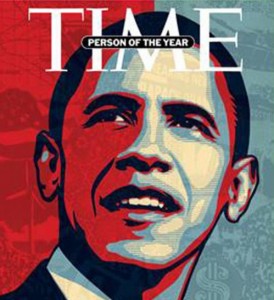 MSNBC is reporting that TIME magazine unveiled its 2012 choice for its iconic Person of the Year cover live on TODAY Wednesday. President Barack Obama is this year’s choice, managing editor Rick Stengel revealed.

As it has for the past 85 years, the weekly newsmagazine selected the person (or sometimes group, or thing) that its editors deemed had the single greatest impact during the past year, for better or for worse.

Time’s Person of the Year has been a perennial topic of year-end debate ever since aviator Charles Lindbergh was chosen the first Man of the Year back in 1927 (the title was amended to Person of the Year in 1999). But the title is not necessarily an accolade; while many presidents, political leaders, innovators and captains of industry have been cited, some of the more notorious Persons of the Year include Adolf Hitler in 1938, Joseph Stalin in 1943 and Iran’s Ayatollah Khomeini in 1979. There have also been more conceptual choices, such as “the American Fighting-Man” (1950), “Middle Americans” (1969), and last year’s choice, The Protester.