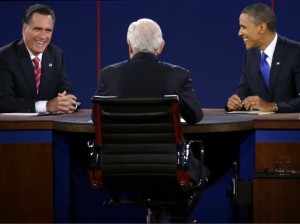 The third presidential debate of this election year between President Obama and Mitt Romney was held at Lynn University in Boca Raton, Florida.   I gave the evening to President Obama.   CNN’s poll of registered voters gave Obama a 48% to 40% edge over Romney.  CBS in a poll of uncommitted voters gave the debate to Obama also.

The debate was moderated well by correspondent Bob Schieffer, host of Face the Nation.

The questions/topics covered the Middle East extensively including Libya, Egypt, Syria, Iraq, Iran, Israel, Afghanistan and Pakistan.  There was some mention of China but absolutely no references to the economic problems in Europe.

Most of the debate saw President Obama answering questions with more resolve while also attacking Mitt Romney’s positions.  Romney went out of his way to avoid any conflict with Obama and agreed with him a great deal.  I would even say that Romney sounded dovish at times which must have irked some of his Republican and Conservative supporters.  The most memorable line of the evening was when in response to Romney’s claim that we are cutting the military budget and that the US Navy has fewer warships than it had in 1917, President Obama said “we have fewer horses and bayonets too” but that is because the nature of modern warfare has changed and we rely much less on battleships.

Mitt Romney has nothing really coherent or substantive to say about domestic policy, but at least he can sound energetic and confident about it. On foreign policy, the subject of Monday night’s final presidential debate, he had little coherent to say and often sounded completely lost. That’s because he has no original ideas of substance on most world issues, including Syria, Iran and Afghanistan.

During the debate, on issue after issue, Mr. Romney sounded as if he had read the boldfaced headings in a briefing book — or a freshman global history textbook — and had not gone much further than that. Twice during the first half-hour, he mentioned that Al Qaeda-affiliated groups were active in northern Mali. Was that in the morning’s briefing book?

At other times, he announced that he had a “strategy” for the Middle East, particularly Iran and Syria, and really for the whole world, but gave no clue what it would be — much like his claim that he has a plan to create 12 million jobs and balance the budget while also cutting taxes, but will not say what it is. At his worst, Mr. Romney sounded like a beauty pageant contestant groping for an answer to the final question. “We want a peaceful planet,” he said. “We want people to be able to enjoy their lives and know they’re going to have a bright and prosperous future and not be at war.”

He added that the United States “didn’t ask for” the mantle of global leadership but was willing to wear it. We wondered what Ronald Reagan would have thought of that.

Mr. Romney’s problem is that he does not actually have any real ideas on foreign policy beyond what President Obama has already done, or plans to do. He supports the planned withdrawal from Afghanistan — and was quick to insist on Monday night that he would pull out by 2014. He thinks there should be economic sanctions on Iran, and he thinks the United States should be encouraging Syrian opposition forces that seem moderate. Mr. Romney said he would work with Saudi Arabia and Qatar on this, but those governments are funneling arms to the jihadist groups that he says he abhors.

The president kept up the attack at virtually every opportunity, showing no sign of the oddly disconnected Barack Obama who lost the first debate. When Mr. Romney called for spending more money on the military than the United States can afford or the military wants, Mr. Obama moved in: “You mentioned the Navy, for example, and that we have fewer ships than we did in 1916. Well, Governor, we also have fewer horses and bayonets.” Mr. Romney tried to revive the Republican claim that Mr. Obama conducted an “apology tour” at the start of his presidency, which Mr. Obama correctly called “the biggest whopper” of a campaign that has been filled with them. And he took a dig at Mr. Romney’s recent world travels. “When I went to Israel as a candidate,” he said, “I didn’t take donors, I didn’t attend fund-raisers.”

Mr. Romney tried to say that the president had “wasted” the last four years in trying to stop Iran’s nuclear weapons program. But Mr. Obama said, “We’ve been able to mobilize the world. When I came into office, the world was divided. Iran was resurgent. Iran is at its weakest point, economically, strategically, militarily.”

Mr. Romney tried to set himself apart from Mr. Obama on Iran, but ended up sounding particularly incoherent. At one point he said he would indict President Mahmoud Ahmadinejad on genocide charges. He gave no clue how he would do that; like many of his comments, it was merely a sound bite.

Mr. Romney’s closing statement summed it all up. He said almost nothing about foreign policy. He moved back to his comfort zone: cheerfully delivered disinformation about domestic policy.