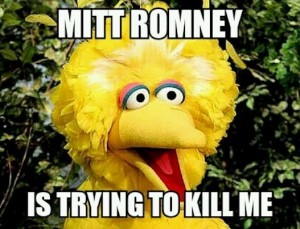 Reuters is reporting that plans to save Big Bird and Sesame Street from possible extinction are taking shape in the form of a puppet-based protest next month dubbed the “Million Muppet March.”

The demonstration is planned for Nov. 3rd at the National Mall in Washington, D.C.

“Before the presidential debate between Democratic President Barack Obama and Republican challenger Mitt Romney had concluded on Oct. 3, two men who had never met each floated the Million Muppet March idea on social media. They immediately united to defend public broadcasting.

Romney pledged during the debate to end the U.S. federal government’s subsidy for the Public Broadcasting Service despite his professed love for Big Bird, one of the characters on PBS’s 43-year-old children’s educational program Sesame Street, which features the Muppets.

Michael Bellavia, 43, an animation executive from Los Angeles, and Chris Mecham, 46, a university student in Idaho, separately came up with the Million Muppet March idea in response…

Bellavia bought the URL www.millionmuppetmarch.com during the debate and discovered Mecham had already started a Facebook page by the same name.

Within 30 minutes of the end of the debate they were on the phone with each other, planning the march.

“I figured, why just make it a virtual show of support? Why not take this opportunity because it seemed like there was already a growing interest in it and actually make it an active, participatory event,” Bellavia said. “I literally just said, ‘It’s happening.'”

Both men consider themselves fans of “Sesame Street,” perhaps the best-known program on PBS, which received $445 million of $3.8 trillion in federal budget outlays in 2012.

They are not sure how many people or muppets will come to the event but they do hope to create what Bellavia called a “lovefest” featuring skits and performances with Muppets.”