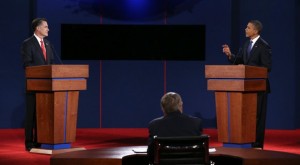 The first presidential debate came and went last night without any “zingers” or defining moments. Both President Obama and Mitt Romney presented themselves well and knowledgeable.   The entire debate focused mainly on the economy, government spending and deficits.  I was pleased to see that both candidates interjected issues related to education into their responses.  Romney commenting on school choice and Obama on Race to the Top and community colleges.  On these issues, I thought Obama had more to say.  However, the overall evening  was won by Romney who appeared energetic and happy to be at the debate. Obama on the other hand appeared tired and at times seemed to be someplace else.  Chris Matthews of MSNBC, commented afterwards that Obama was “enduring” the debate.  Obama never mentioned the 47 percent, Bain-Capital or any other “hot-button” campaign issues that have generally put the Romney campaign on the defensive.

A New York Times article has a good description of the evening as:

“But for all of the anticipation, and with less than five weeks remaining until Election Day, the 90-minute debate unfolded much like a seminar by a business consultant and a college professor. Both men argued that their policies would improve the lives of the middle class, but their discussion often dipped deep into the weeds, and they talked over each other without connecting their ideas to voters.

If Mr. Romney’s goal was to show that he could project equal stature to the president, he succeeded, perhaps offering his campaign the lift that Republicans have been seeking. Mr. Obama often stopped short of challenging his rival’s specific policies and chose not to invoke some of the same arguments that his campaign has been making against Mr. Romney for months.

…For much of the debate, the candidates commandeered the stage, taking control away from the moderator, Jim Lehrer of PBS, as they kept trying to rebut one other. At times, the moderator seemed as if he had walked off the stage, a result of new rules that were intended to allow for a deeper and more freewheeling discussion.

On a basic level it was a clash of two ideologies, the president’s Democratic vision of government playing a supporting role in spurring economic growth, and Mr. Romney’s Republican vision that government should get out of the way of businesses that know best how to create jobs.

Mr. Romney sought to use his moment before a prime-time audience of tens of millions to escape the corner Mr. Obama and his allies have painted him into, depicting him as an uncompromising adherent to policies that have been tried before. He instead turned the focus on his opponent’s record.”