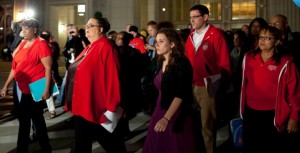 The Chicago teachers strike is entering its fifth day.  Talks yesterday between the Chicago Teachers Union (CTU) and the city broke down without an agreement.  Reuters via the Huffington Post has an article today identifying wealthy supporters of Mayor Rahm Emanuel as part of the reason for the animosity between the two sides.  It identifies a number of prominent donors to Emanuel’s mayoral campaign who have been antagonistic to teachers and their unions.   Here is an excerpt:

“Emanuel has built a strong base of donors outside the labor movement, including corporate and cultural icons and even some prominent Republicans. He received a $50,000 donation from real estate magnate Donald Trump, who flirted with a bid for the Republican presidential nomination, a disclosure to the elections board showed.

Emanuel has enjoyed substantial support from wealthy backers of the national education reform movement, which aims to transform public schools — in part by weakening teacher unions.

The reform movement’s agenda includes rating educators in part by their students’ test scores and weakening job protections such as tenure and seniority. Those are the very issues that prompted the teacher strike in Chicago now in its fourth day.

Stand for Children lobbied for an Illinois state law passed in 2011 that overhauled policies on teacher tenure, hiring, the length of the school day and year and teacher evaluations. Mayor Emanuel’s allies in the Chicago school district have cited that law in explaining why they feel they must stand their ground against the teachers’ union.

According to the regulatory filings, common donors to the Stand for Children PAC — which raised nearly $4 million in the last four months of 2010 — and to the Emanuel campaign include Kenneth Griffin, the founder and chief executive of hedge fund Citadel, and Paul Finnegan, a co-chief executive of private equity firm Madison Dearborn Partners.

Other common donors include members of the Pritzker family, one of Chicago’s most prominent business families, and the well known Crown family of Chicago, who have a long history of philanthropy.

Some striking teachers have carried signs mocking Penny Pritzker, an executive of the family conglomerate and one of President Barack Obama’s biggest Democratic fundraisers.

Stand for Children Chicago director Juan Jose Gonzalez said many of its donors give generously to various groups and not too much should be read into the same names appearing on its PAC filings and those of Emanuel.

“I would say that Emanuel backs our position and is supportive of our agenda,” he said.

But the similarities between the donations to Emanuel and Stand for Children were not lost on the Chicago Teachers Union, which highlighted them during the 2011 election campaign and called the group an “out-of-state organization responsible for the latest legislative attacks” on the union.

Other education reform groups have made it their mission to provide financial cover for Democratic politicians willing to buck teachers unions and push big changes to public schools. They include Democrats for Education Reform, a coalition of wealthy financiers and entrepreneurs, and StudentsFirst, which is run by Michelle Rhee, the former chancellor of the Washington D.C. public schools. “

As I have indicated earlier this week, the Chicago Teachers strike is important symbolically for teachers around the country.  It is not just about Chicago but about educators in American public schools reclaiming  positions of influence that have been undermined by a school reform movement that has pandered to moneyed interests.