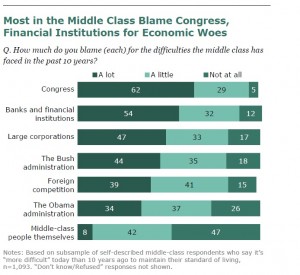 The 2000s was the worst decade in modern history for the American middle class. That, according to a study released yesterday by the nonpartisan Pew Research Center.   Highlights of the study include:

One of the more telling findings was that blame for the middle-class decline is attributed to a number of political institutions and individuals.  See barchart above.