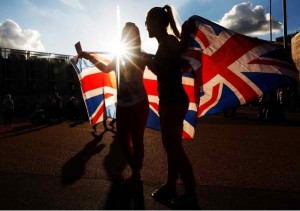 For those of us who have been following the Olympics, once we get beyond our favorite athletes or sports,  we cannot help but be impressed at the organization, the venues, and the overall quality of the Games.  Roger Cohen in his New York Times column today comments on the importance of the success of the Olympic Games on the British mindset:

“The startling shift in Britain over the past couple of Olympic weeks from despondency to delight, as if the 541 members of “Team GB” had injected a depression-dispelling elixir into the bloodstream of the Brits. The mood swing has been whiplash-inducing…

The gloom gluttons were in overdrive in the weeks before the Olympics. Security personnel were rubbish. Strikes would paralyze the city. Olympic lanes would produce bottlenecks stretching to Brighton. Terrorists would wreak havoc. Dark clouds over a wintry London presaged a fiasco. The Guardian’s front page screamed: “What could go wrong?”

Nothing has. It has all been so perfect. Of course it has.

The sun has shone. Never has it been easier to get to work. The streets of central London are empty while up at the Olympic Park happy crowds throng. One of them was Brian Duffy, a 34-year-old investment banker (even bankers are being spared their daily dose of vitriol), who told me: “Everyone is taking a break, a break from their worries, from recession, from negativity, and just getting behind this.”

In addition, British athletes have done astonishingly well in the Games themselves having racked up 22 gold medals and 48 medals as of yesterday.  In fact,  Britain has recorded its finest performance since 1908.

Cohen also raises the question as to how long the good feelings will last.

“The euphoria won’t last, of course. Taf Pilgrim, strolling with his pregnant wife, said, “Hopefully the good feelings will endure a bit.” If the slogan of these Olympics — “inspire a generation” — is to mean anything, they will have to. But I wonder.

I can already see the stories on the white elephant of a stadium, the cost of it all, the terrible Olympics hangover, the suffering shopkeepers of central London denied regular summer tourism, the cynical politicians posturing to claim credit — a great autumnal binge of renewed British despondency.

Until then, enjoy this. As the Olympics mood whiplash demonstrates, there are many reasons for optimism. In truth the lesson of Britain’s bout of bipolarity is that we are lonely. That is the problem with modernity. When we come together, rediscover community, the feeling is as good as an adrenalin rush.”

All in all, I would say it has been a jolly good show.