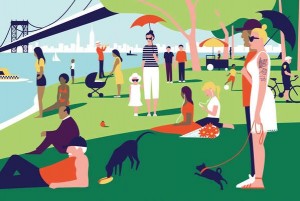 Frank Bruni gives New York City and Mayor Michael Bloomberg well-deserved kudos in his column for the  investments made in the past decade in expanding and improving our parks and green spaces.

“This city [New York] looks nothing — nothing — like it did just a decade and a half ago. It’s a place of newly gorgeous waterfront promenades, of trees, tall grasses and blooming flowers on patches of land and peninsulas of concrete and even stretches of rail tracks that were blighted or blank before. It’s a lush retort to the pessimism of this era, verdant proof that growth remains possible, at least with the requisite will and the right strategies.

The transformation of New York has happened incrementally enough — one year the High Line, another year Brooklyn Bridge Park — that it often escapes full, proper appreciation. But it’s a remarkable, hopeful stride.

It’s also emblematic of a coast-to-coast pattern of intensified dedication to urban parkland. While so much of American life right now is attended by the specter of decline, many cities are blossoming, with New York providing crucial inspiration.

“It represents a great example because it’s our largest urban area in America,” said Ken Salazar, the United States secretary of the interior, on the phone Friday, suggesting that if the Big Apple can carve out green amid its gray, any city can. Salazar plans to visit New York on Tuesday to address an international conference, already under way, called “Greater & Greener: Re-Imagining Parks for 21st Century Cities.”

The location of the conference in New York pays deliberate tribute to the progress this city has made, much of it under the Bloomberg administration, which followed through on plans it inherited, expanding some of them, and hatched many of its own.”

Congratulations New York, Mayor Bloomberg, and all who made this happen.