Thomas Edsall has a sobering blog post today exploring the state of American employment and exploring whether or not our economy has reached a point where due to technology, many jobs that have disappeared since the Great Recession will never come back and in fact, might get worse.  Particularly worrisome is what he calls “the hollowing out” of mid-level jobs.

“The issue of the disappearing middle is not new, but credible economists have added a more threatening twist to the argument: the possibility that a well-functioning, efficient modern market economy, driven by exponential growth in the rate of technological innovation, can simultaneously produce economic growth and eliminate millions of middle-class jobs.

Michael Spence, a professor at N.Y.U.’s Stern School of Business, and David Autor, an economist at M.I.T., have argued that this “hollowing out” process is a result of twin upheavals: globalization and the hyper-acceleration of technological progress.”

Perhaps most troubling is an analysis by Erik Brynjolfsson, a professor at the M.I.T. Sloan School of Management, and Andrew McAfee, a research scientist at M.I.T.’s Center for Digital Business.  Providing the graphic below they offer that the economy has recovered and is doing exceptionally for all indicators except job growth.

“Since the Great Recession officially ended in June of 2009 G.D.P., equipment investment, and total corporate profits have rebounded, and are now at their all-time highs. The employment ratio, meanwhile, has only shrunk and is now at its lowest level since the early 1980s when women had not yet entered the workforce in significant numbers. So current labor force woes are not because the economy isn’t growing, and they’re not because companies aren’t making money or spending money on equipment. They’re because these trends have become increasingly decoupled from hiring — from needing more human workers. As computers race ahead, acquiring more and more skills in pattern matching, communication, perception, and so on, I expect that this decoupling will continue, and maybe even accelerate.” 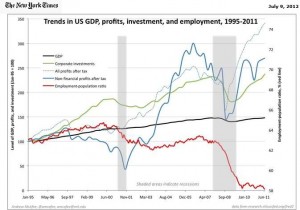 Edsall does provide several counter arguments.  Amar Bhidé, author of the book “The Venturesome Economy,” and senior fellow at the Center for Emerging Market Enterprises at Tufts, did not mince words responding to a request for comment:

“As you might guess I find the storyline rather unconvincing and Luddite. What’s new about automation? I’ve been banging away for years about the phenomenon of non-destructive creation as a vital complement to creative destruction. The two don’t move in lock step but I have no reason to believe that non-destructive creation has ceased. Until someone persuades me it has, I will limit my anxieties to global warming, financial misregulation, a screwed up health care system, etc.”

This is heavy stuff and important issues for political and economic leaders in our country to consider and the sooner the better.