Yesterday we spent the entire day traveling due north in the Baltic Sea from Copenhagen to Stockholm.  Sunset is now at about 10:35 pm and sunrise is at 3:30 am.  I attended three lectures to prepare us for our upcoming ports (Stockholm, Helsinki, St. Petersburg, and Tallin (Estonia)).   The lectures were given by an historian, a tour director and a young graduate art student.  All were interesting in sharing their knowledge about this part of the world.  The historian focused on the wars of the 20th century and the devastation to these cities and how they had to be rebuilt and restored.  The tour director spoke of the natural and man-made beauty of these cities.

I particularly liked the young art student who was born in St. Petersburg in the 1980s and described what it was like growing up under Soviet rule.  Her grandmother or babushka lived her entire life in St. Petersburg and saw the name changed to Leningrad after the revolution in 1917, to Petrograd and back again to St. Petersburg.   The student mentioned how religion was not only frowned upon but repressed.   She attended summer camps where she was taught why atheism was good for her and beneficial to the state.  Magnificent churches built over the centuries were closed down or converted to warehouses, ice skating rinks and swimming pools.  She also provided a good deal of background on the czars and czarinas both good and bad.   Another excellent history lesson.

As I write this I am looking at the entrance to Stockholm with its thousands of islands. 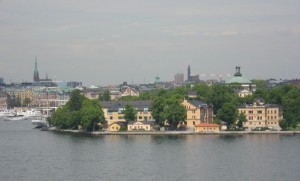