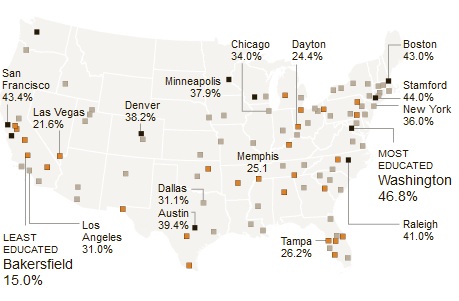 The New York Times has an article on college graduates and their importance to the economic development of American cities.  It examines cities like Washington D.C. (46.8%) and Stamford, Connecticut, (44%) that  have high percentages of college graduates versus Dayton, Ohio (24.4%) and Bakersfield, California(15%) that have much smaller percentages.  Much of the commentary refers to the cities that relied on companies like General Motors to provide good-paying manufacturing jobs that are now trying to redefine their economies to become more technologically and service-oriented but do not have the educated workforces to do so.   The article makes the point that:

“College graduates are more unevenly distributed in the top 100 metropolitan areas now than they were four decades ago. More adults have bachelor’s degrees, but the difference between the most and least educated metro areas is double what it was in 1970….

“This is one of the most important developments in the recent economic history of this country,” said Enrico Moretti, an economist at the University of California, Berkeley, who recently published a book on the topic, “The New Geography of Jobs.”

“There’s a relentless cycle in which knowledge breeds knowledge, but the flip side is that many places are left out,” said Alan Berube, a senior fellow at Brookings who conducted the analysis using census data from the American Community Survey.

Dayton lost about 1 percent of its college-educated 25- to 34-year-olds between 2000 and 2009 at a time when that group grew by 13 percent nationally, said Joe Cortright, senior policy adviser for CEOs for Cities, an economic development group. In Columbus, Ohio, about 70 miles away, the same group grew by 25 percent.”

In addition to economic impact, in a pattern that is part education, part family background, college graduates tend to have longer life expectancies, higher household incomes, lower divorce rates and fewer single-parent families than those with less education, and cities where they cluster tend to exhibit those patterns more strongly.