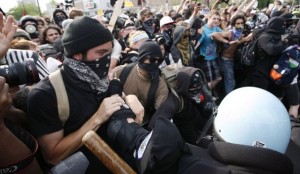 Thousands of protesters marched through downtown Chicago on Sunday in one of the city’s largest demonstrations in years, airing grievances about war, climate change and a wide range of other complaints as world leaders assembled for a NATO summit.

The protest, which for months had stirred worries about violence in the streets, drew together a broad assortment of participants, including peace activists joining with war veterans and people more focused on economic inequality. But the diversity of opinions also sowed doubts about whether there were too many messages to be effective.

And some of the most enduring images of the event were likely to be from the end – when a small group of demonstrators clashed with a line of police who tried to keep them from the lakeside convention center where President Barack Obama was hosting the gathering.