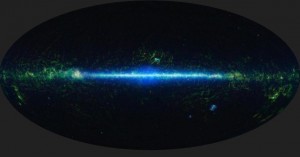 NASA has given us a treat today by releasing images from its WISE satellite.  After fourteen years of preparation and three years of collecting data, we now have an atlas of the entire infrared sky. The image above is just the capstone for a cosmic map that contains 18000 images and 560 million different objects.

This represents the culmination of years of work by NASA’s WISE satellite and the astronomers behind it. By studying the universe in infrared wavelengths, we can see objects that are far too dim to be seen in visible light. Each of the 560 million objects represents either a star or entire galaxy, many of which were completely unknown until WISE began its survey three years ago.

For more, check out NASA’s website and the WISE homepage.