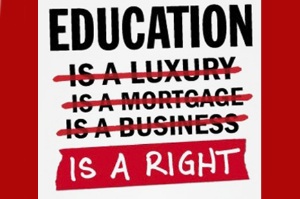 For the college Occupy movement, the past couple of months have been largely quiet – the attention-grabbing marches and rallies have fizzled and encampments have closed.   But students say quietness does not equal dormancy, and today they’ll be out to prove it in a national “Day of Action.”  Inside Education has an article on activity that will be undertaken on campuses throughout the country:

“Students are still working, but just because they haven’t seen all of us out in the streets every day, they think that it’s over,” said Caitlin MacLaren, a New York University student and organizer at Occupy Education, a network of occupations and student and faculty groups that are coordinating the Day of Action. “People will see that it’s just kind of a winter lull, and people are just hibernating a little bit.”

During this down time, students on campuses spanning California to Florida have been discussing the “next phase” of the movement, which Occupy Education says will begin today. More than 100 campus occupations and education and labor groups have told Occupy Education they will take part, but, as previous events have shown, many who participate do so informally. Expected student turnout is in the hundreds for many colleges; on many campuses, rallies or teach-ins are planned.”

Here at the CUNY Graduate Center, Alyson Spurgas has emailed that:

“We are planning something of a street theater-style action–the theme is “what’s on CUNY’s menu.” This will involve a skit we will be putting on in the dining commons on the 8th floor, which will be centered around “waiters” and “waitresses” serving “patrons” (CUNY students) a variety of “dishes” from a “menu” we are putting together this evening (which will also serve as literature to hand out throughout the week). Basically, the idea is this–CUNY offers us “specials” like safety/security, an accessible/affordable public education, democratic/self-determined/community control over our university, free speech/academic freedom, the right to dissent/protest peacefully, and the opportunity to teach the students of NYC/meaningful academic employment. Instead, we are “served” Kroll/increased surveillance, student debt/tuition increases, malfeasant student arrests/police violence, the silencing of our voices in and out of the classroom, and the exploitation of our labor. This will all be acted out in a five-minute skit in the 8th floor cafeteria on Thursday March 1st at 12:30pm. It will involve a LOT of audience participation (we may have kazoos?) and will hopefully end in a dance party/speak-out in the lobby, where we will converge and head to the DOE downtown to be part of the other actions that are taking place that day in Manhattan and Brooklyn.”