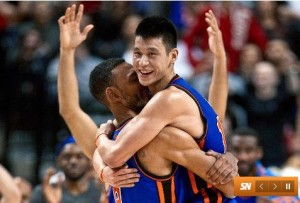 I have resisted commenting on the Jeremy Lin craze taking over the city, the country and beyond.  For New York Knick fans the past week has been a soaring delight as we watched a completely unknown point guard who had been cut by two other NBA teams become an overnight sensation.  Jeremy Lin, a Harvard graduate, Asian-American, and religious young man has taken what looked to be another dismal Knick season and completely turned it around.  He has scored more points in his first four games than the likes of Michael Jordan, Shaq Oneal, and Kobe Bryant.  Last night against the Toronto Raptors, he made a three –pointer with just .5 seconds left to give the Knicks a win 90-87 and continue a five-game winning streak.

The Knick-Toronto Rapto game was sold out mainly because of the interest in Lin.  Across the globe in China, people from all walks of life want to know more about Lin who they see as one of their own.  As an example of his far-reaching appeal, the New York Times had this description of Lin’s impact:

“The clearest sign that Jeremy Lin’s appeal has spanned the Pacific to mainland China may lie not in the 1.4 million Chinese microblog messages mentioning him in recent days, but in a rare failure to meet demand here in the heart of one of the world’s largest centers of pirated garment manufacturing [Hangzhou].

Yan Ronghui, a professor at the Zhejiang Theological Seminary, plans to use Jeremy Lin’s successes as a model for a course.

“His jerseys have sold out, even including the counterfeit ones,” said Zheng Xiaojun, a 24-year-old clerk here in the capital of Zhejiang province, near Shanghai.

Lin’s stunning success with the Knicks over the last week and a half has captured the imagination of the Chinese, from Communist Party bosses to the often-persecuted Christian minority. He has been particularly popular here in northern Zhejiang province, from which his maternal grandmother fled to Taiwan in the last days of China’s civil war in the late 1940s.”

The sportswriters and pro basketball players are all beginning to see him as the real thing who will have a long stay in the NBA.  We wish him well and wait to see if he can make his mark in the rough and tumble world of professional basketball.