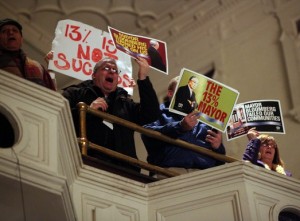 The decision drew protests from hundreds of teachers’ union members, parents and students, who gathered in the auditorium of Brooklyn Technical High School along with a group that was inspired by the Occupy Wall Street movement.

The New York Times reported that:

“The Panel for Educational Policy, a board that replaced the city’s Board of Education, determined that the schools’ test scores, graduation rates and leadership failings were too severe to merit keeping them open. Among them were nine schools opened during Mayor Michael R. Bloomberg’s tenure.

The panel also voted to approve the location of 16 new schools that will take the place of those that are closed, as well as the expansion of four other schools.

The panel is controlled by Mayor Michael R. Bloomberg, who appoints a majority of its 13 members. Since its creation, it has never voted to reject a school closing proposal, a fact that has fueled deep resentment from advocacy groups and the city’s teachers’ union, who claim the panel is effectively a rubber stamp for the mayor’s policies.

That history held true, with all the mayor’s appointees approving the proposals, while the representatives from Manhattan, Brooklyn, Queens and the Bronx dissented.

The Staten Island representative voted for the closings, except for the school in her borough.”