President Barack Obama gave his State of the Union speech last night.  He was on message and engaging but much of what he said sounded like he was campaigning.  There was a lot about the economy, jobs, the national debt, winding down the war in Afghanistan,  energy, etc.  He also talk a good deal more about education than I thought he would.  Workforce development, community colleges, stop teacher bashing, college costs, and instructional technology.  See excerpt below on education-related comments.   The full text of his speech is available at the Huffington Post.

A highlight of the evening was when President Obama and Rep. Gabrielle Giffords embraced just as he walked into the chamber. 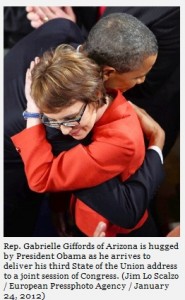 Excerpt from State of the Union

Jackie Bray is a single mom from North Carolina who was laid off from her job as a mechanic. Then Siemens opened a gas turbine factory in Charlotte, and formed a partnership with Central Piedmont Community College. The company helped the college design courses in laser and robotics training. It paid Jackie’s tuition, then hired her to help operate their plant.

I want every American looking for work to have the same opportunity as Jackie did. Join me in a national commitment to train two million Americans with skills that will lead directly to a job. My Administration has already lined up more companies that want to help. Model partnerships between businesses like Siemens and community colleges in places like Charlotte, Orlando, and Louisville are up and running. Now you need to give more community colleges the resources they need to become community career centers — places that teach people skills that local businesses are looking for right now, from data management to high-tech manufacturing.

And I want to cut through the maze of confusing training programs, so that from now on, people like Jackie have one program, one website, and one place to go for all the information and help they need. It’s time to turn our unemployment system into a reemployment system that puts people to work.

These reforms will help people get jobs that are open today. But to prepare for the jobs of tomorrow, our commitment to skills and education has to start earlier.

For less than one percent of what our Nation spends on education each year, we’ve convinced nearly every State in the country to raise their standards for teaching and learning — the first time that’s happened in a generation.

But challenges remain. And we know how to solve them.

At a time when other countries are doubling down on education, tight budgets have forced States to lay off thousands of teachers. We know a good teacher can increase the lifetime income of a classroom by over $250,000. A great teacher can offer an escape from poverty to the child who dreams beyond his circumstance. Every person in this chamber can point to a teacher who changed the trajectory of their lives. Most teachers work tirelessly, with modest pay, sometimes digging into their own pocket for school supplies — just to make a difference.

Teachers matter. So instead of bashing them, or defending the status quo, let’s offer schools a deal. Give them the resources to keep good teachers on the job, and reward the best ones. In return, grant schools flexibility: To teach with creativity and passion; to stop teaching to the test; and to replace teachers who just aren’t helping kids learn.

We also know that when students aren’t allowed to walk away from their education, more of them walk the stage to get their diploma. So tonight, I call on every State to require that all students stay in high school until they graduate or turn eighteen.

When kids do graduate, the most daunting challenge can be the cost of college. At a time when Americans owe more in tuition debt than credit card debt, this Congress needs to stop the interest rates on student loans from doubling in July. Extend the tuition tax credit we started that saves middle-class families thousands of dollars. And give more young people the chance to earn their way through college by doubling the number of work-study jobs in the next five years.

Of course, it’s not enough for us to increase student aid. We can’t just keep subsidizing skyrocketing tuition; we’ll run out of money. States also need to do their part, by making higher education a higher priority in their budgets. And colleges and universities have to do their part by working to keep costs down. Recently, I spoke with a group of college presidents who’ve done just that. Some schools re-design courses to help students finish more quickly. Some use better technology. The point is, it’s possible. So let me put colleges and universities on notice: If you can’t stop tuition from going up, the funding you get from taxpayers will go down. Higher education can’t be a luxury — it’s an economic imperative that every family in America should be able to afford.