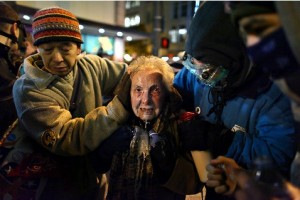 Today there will be a series of demonstrations, teach-ins and marches to celebrate two months since the protests started in New York City.  These will come two days after the NYPD cleared out Zuccotti Park of tents, sleeping bags, and other equipment that the demonstrators were using.

An 84 year-old woman (pictured above), a priest and a pregnant woman were pepper-sprayed during a march to Seattle’s Westlake Park in support of evicted protesters in New York. [Seattle Post-Intelligencer]

In Boston, protesters won a temporary a restraining order prohibiting the city from evicting their encampment. [Boston Globe]

An unrelated shooting on campus did not stop thousands of people from rallying at the University of California, Berkeley. The crowd included hundreds of Occupy protesters recently evicted in Oakland. Robert Reich, a Berkeley professor and former United States labor secretary, told the crowd that “the days of apathy are over.” Students there were expected to join a large protest in San Francisco Wednesday afternoon. [SF Gate]