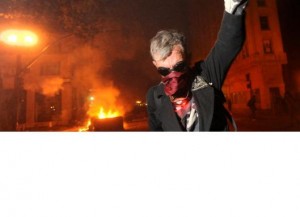 Occupy Oakland shut down the Port of Oakland but sadly ended in violence when police in riot gear arrested dozens of protesters overnight who broke into a vacant building, shattered downtown windows, sprayed graffiti and set blazes along the way.

At least four protesters were hospitalized Thursday with various injuries, including one needing stitches after fighting with an officer, police said. Several officers were also injured but didn’t need hospitalization.

It is unclear from early reports how the violence started.  Police said that about 7,000 people participated in demonstrations throughout the day that were peaceful except for a few incidents of vandalism at local banks and businesses. Boots Riley, a protest organizer, touted the day as a success, saying “we put together an ideological principle that the mainstream media wouldn’t talk about two months ago.”  However, at some point a group of protesters broke into the former Travelers Aid building in order to, as some shouting protesters put it, “reclaim the building for the people.”  Fires were also set.

I think many of us support the Occupy Wall Street throughout the country, we also support it as a peaceful movement.