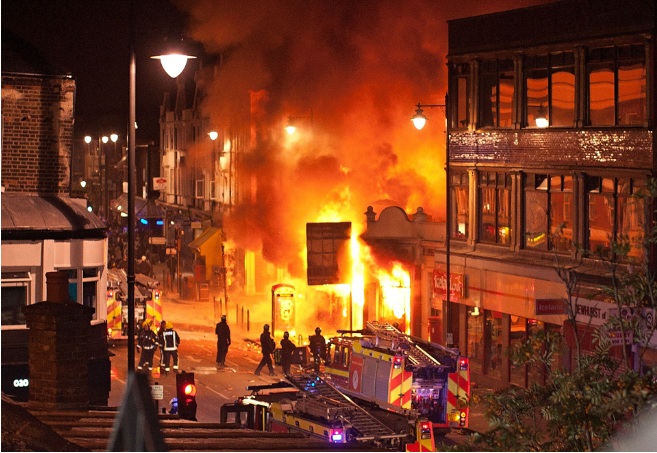 What started as protests against the killing of a young man and father by police has escalated into full-scale rioting, looting and arson throughout London and beyond.  Mark Duggan, the shooting victim, has been portrayed as a gang member and drug dealer by the police and a loving father by the mother of his three children.  The circumstances surrounding his death are still being investigated but questions have been raised as to whether police acted too hastily in drawing and firing their guns.

The riots, however, represent more than this incident and are being seen as protests against the government, cutbacks in social programs and less opportunities for employment especially among minority youth according to Kinsley Abrams, Councillor of the Borough of Lambeth.  The rioters moved from one section of London to others including parts of Hackney, Lewisham, Clapham, Peckham, Croydon, Woolwich and Enfield.  Police report that rioters used Blackberries and other portable devices to move  to areas where police are not patrolling in sufficient numbers.  The  rioting has also spread to other cities including Birmingham, 110 miles northwest of London, as well as to Bristol and Liverpool, giving credence to the idea that it is no longer about the killing of one young man but something larger.

We have seen this over and over again in other parts of the world as well as here in the United where one incident can ignite an explosion of violence in response to social injustice and tough economic times.

Below is a video report on the rioting.