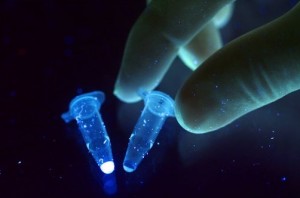 The NY Times has an article today on the definition of life.  What started as an exercise in being able to better recognize extraterrestrial life should they come upon it, scientists are working to create simple life forms in a lab. The article states that “a handful of chemists and biologists…are using the tools of modern genetics to try to generate the Frankensteinian spark that will jump the gap separating the inanimate and the animate. The day is coming, they say, when chemicals in a test tube will come to life. “

Gerald F. Joyce, a professor at the Scripps Research Institute in San Diego, has already crossed that line, although he would be the first to say he has not — yet.

“Four years ago Dr. Joyce and a graduate student, Tracey A. Lincoln, now a researcher at the University of Massachusetts Medical School, evolved a molecule in a test tube that could replicate and evolve all by itself, swapping little jerry-built genes in a test tube forever, as long as it was supplied with the right carefully engineered ingredients.

An article in the Joyce Laboratory newsletter called it ‘The Immortal Molecule.’ Dr. Joyce’s molecule is a form of RNA, or ribonucleic acid, which plays Robin to DNA’s Batman in Life As We Do Know It, assembling proteins in accordance with the blueprint encoded in DNA. Neither RNA nor DNA is alive by itself, any more than any other chemical, like bleach, or a protein. But in Dr. Joyce’s test tube, his specially engineered RNA molecule comes close, copying itself over and over, and evolving.”

A three-minute video with excellent graphics explaining the role of RNA, proteins, and DNA in all of this is available at: http://video.nytimes.com/video/2011/07/27/science/100000000937455/life-out-there-eden-in-a-test-tube.html?nl=todaysheadlines&emc=tha23