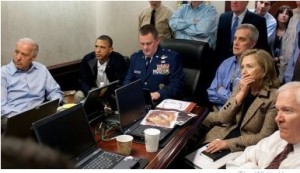 From halfway around the world, President Barack Obama and his national security team (Hilary Clinton, Joe Biden, Bob Gates and others) monitored the strike on Osama bin Laden’s compound in real time, watching and listening to the firefight that killed the terrorist leader.

The Huffington Post reported that the President and his team gathered in the White House Situation Room.  Members of the group held their breath and barely spoke as they waited to see whether a carefully crafted yet extremely risky plan would succeed, said White House counterterrorism adviser John Brennan.

Brennan said he would not reveal details “about what types of visuals we had or what type of feeds that were there but it was – it gave us the ability to actually track it on an ongoing basis.” Typically, members of the Navy SEAL team that conducted the operation wear helmet cameras that transmit sound and video to their operation centers and that data can be fed live to the White House and Pentagon.

Congratulations to all involved!