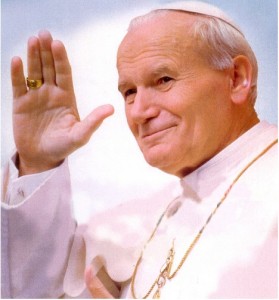 Maureen Dowd had a most serious column yesterday weighing in on the upcoming beatification of the late Pope John Paul II on May 1st.  She considers his qualities and shortcomings and concludes that his beatification is premature.  Here is a part of her analysis:

“Certainly, John Paul was admirable in many ways… he was a moral force in the fight against totalitarianism, touring his homeland and giving Poles the courage to resist the Soviet Union…

“The excessive hoarding of riches by some denies them to the majority,” he said, “and thus the very wealth that is accumulated generates poverty.”

As progressive as he was on those issues, he was disturbingly regressive on social issues — contraception, women’s ordination, priests’ celibacy, divorce and remarriage. And certainly, John Paul forfeited his right to beatification when he failed to establish a legal standard to remove pedophiles from the priesthood, and simply turned away for many years.”

The last comment on the priesthood and pedophilia weighs heavily.  Ms. Dowd asks:

“How can you be a saint if you fail to protect innocent children?”