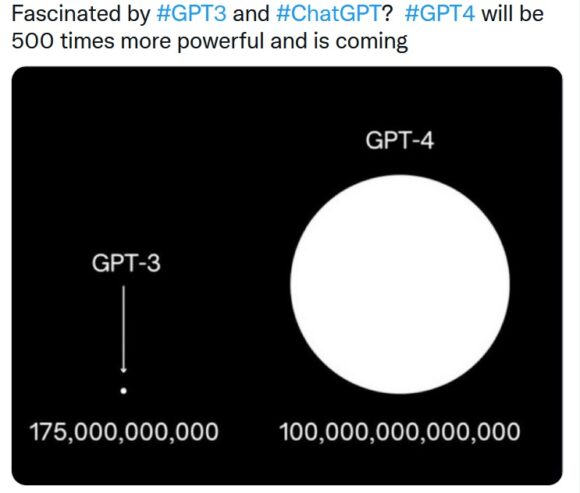 On Tuesday, I was briefly interviewed by reporter,  Alexandra Tremayne-Pengelly, for  Observer regarding my opinion of ChatGPT that is causing concerns among faculty throughout academia.   I specifically discussed with Alexandria the projected expansion of GPT-3 as shown above.

Below is an article published this morning where I am quoted.

Professors Are Scrambling as Students Turn in AI-Generated Homework

When ChatGPT, an artificial intelligence text generator, was released by OpenAI in November, it quickly garnered widespread attention and frustration from educators.

In the subsequent months, professors have been forced to contend with the prominence of the new AI tool and its lack of guardrails concerning student use. “It takes time for institutions to institute policies that are fair and responsible towards their students,” said Andrew Piper, a language and literature professor at McGill University. “In the meantime, there’s just chaos.”

Citing concerns about ChatGPT being used by students to produce essays and assignments, the New York City Department of Education banned the chatbot from public schools across the city earlier this month. But in universities, the onus on how to approach ChatGPT has largely been left to professors.

The reaction from teachers has been widespread, said Antony Aumann, a philosophy professor at Northern Michigan University. Some professors are attempting to outsmart the text generator with clever prompts, while others have primarily focused on catching students using it. “It’s interesting how diametrically opposed different professors are to this.”

Others are less concerned about the technology. “I think the vast majority right now are trying to figure out what, if anything, to do,” said Anthony Picciano, an education professor at Hunter College who isn’t planning on making any significant changes to his teaching. “If this helps the students formulate ideas, I’m not against it.”

Some universities, like the University of Texas at Austin, have begun redrafting their plagiarism definitions to include ChatGPT and AI-generated responses, according to Frederick Luis Aldama, a professor in the school’s english department. Aldama also said the school is waiting for Turnitin, a plagiarism detection software, to incorporate ChatGPT into its detection services.

Is ChatGPT the next calculator?

In the meantime, to thwart potentially cheating students, Aldama said some professors have been using GPTZero, an app developed by Edward Tian, a 22-year old college student, which claims to detect AI-generated text. Aldama, who said he’s already been able to identify AI-generated assignments with GPTZero, isn’t punishing students for their use of the chatbox, but instead asking them to critique ChatGPT-created work. “What are you going to do, start punishing kids who see it as one other instrument available out there?”

OpenAI,  Turnitin and Tian did not respond to requests for comment.

“We’ll be using it as a tool, just as how we would use a calculator in a math class,” said Aldama. He also believes the new prominence of AI in higher education could cause more professors to assign work on lesser-known texts which will have less information readily available online for ChatGPT to form into an essay. “Let’s use this opportunity to reflect on what we’ve been teaching,” he said.

Other professors also plan on using the AI-generator in classroom discussions. “It’s going to be out there once they graduate, whether they like it or not,” said Aumann. “We have to train them how to use it wisely.” He’s incorporated ChatGPT into assignments, encouraging students to add a paragraph explaining how they used it for feedback and grammatical help.

However, Picciano is keeping an eye on GBT-4, a new version of OpenAI’s text generation software posed to significantly advance ChatGPT. No official release date has been announced by OpenAI, and Sam Altman, the company’s CEO, recently stated the software won’t be released until it can be done so safely.

“This is brand new, this is infancy,” said Picciano. “My concern is what is to come.”