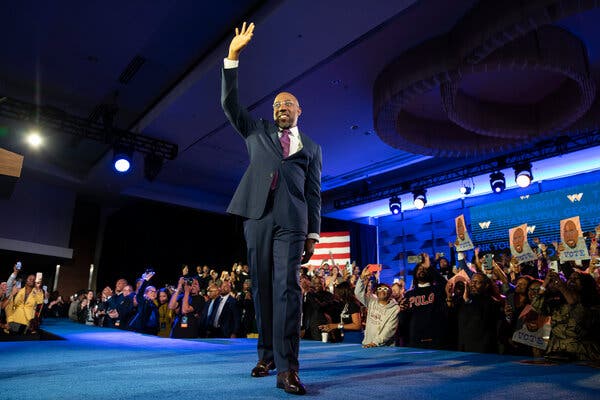 Senator Raphael Warnock defeated his Republican challenger, Herschel Walker, in a runoff election that capped a grueling and costly campaign, and secured a 51-seat Democratic majority and gave the first Black senator from Georgia a full six-year term.

Mr. Warnock’s victory was called by The Associated Press late last night evening as the senator’s lead was expanding to 51 percent compared with Mr. Walker’s 49 percent. It ended a marathon midterm election cycle in which Democrats defied history, as they limited the loss of House seats that typically greets the party that holds the White House and now gain a seat in the Senate.

Throughout one of the most expensive Senate races in American history, Mr. Warnock used the cadences and lofty language he honed as the senior pastor of Atlanta’s Ebenezer Baptist Church to ask Georgia voters to rise above the acrimony and division of Donald J. Trump’s politics.

“I am Georgia,” he proclaimed last night in Atlanta, invoking the martyrs and heroes of the civil rights movement and the small towns and growing cities of his childhood. “I am an example and an iteration of its history, of its peril and promise, of the brutality and the possibilities. But because this is America, because we always have a path to make our country greater against unspeakable odds, here we stand together.”

He uttered what he called the four most powerful words in a democracy: “The people have spoken.”

The defeat of Mr. Walker, who was handpicked by Mr. Trump, culminated a disastrous year for the former president, who set himself up as a Republican kingmaker, only to watch his Senate candidates in Nevada, Arizona, Pennsylvania and New Hampshire — as well as his picks for governor in Arizona, Michigan, Pennsylvania and Georgia — go on to defeat in primaries or in last month’s general election.

Mr. Walker’s loss will almost certainly lead to soul-searching for a Republican Party that must decide heading into the 2024 election how firmly to tether itself to a former president who has now absorbed powerful political blows in three successive campaign cycles. An exhausted-looking Mr. Walker spoke only briefly after his defeat, asking his supporters at an event at the College Football Hall of Fame in Atlanta, “We’ve had a tough journey, have we not?” He added, “God is good.”  As reported by The New York Times.

The Georgia result also holds a bold message about race in the rising New South.

Mr. Warnock was the first Black person from Georgia to be elected to the Senate when he won a 2021 runoff. Republicans chose another Black candidate to try to deny him a full term — a former football star with no political experience and little ideological depth — elevating the role of race and identity in a contest where the Republican candidate denied the existence of racism and the Democrat spoke of painful injustices that have yet to be remedied.

Now, with six years ahead of him in the chamber, Mr. Warnock will remain part of a stunningly small group: Of the more than 2,000 people who have served in the United States Senate, only 11 have been Black. Of the Senate’s 100 current members, just three are Black: Mr. Warnock; Cory Booker, Democrat of New Jersey; and Tim Scott, Republican of South Carolina.