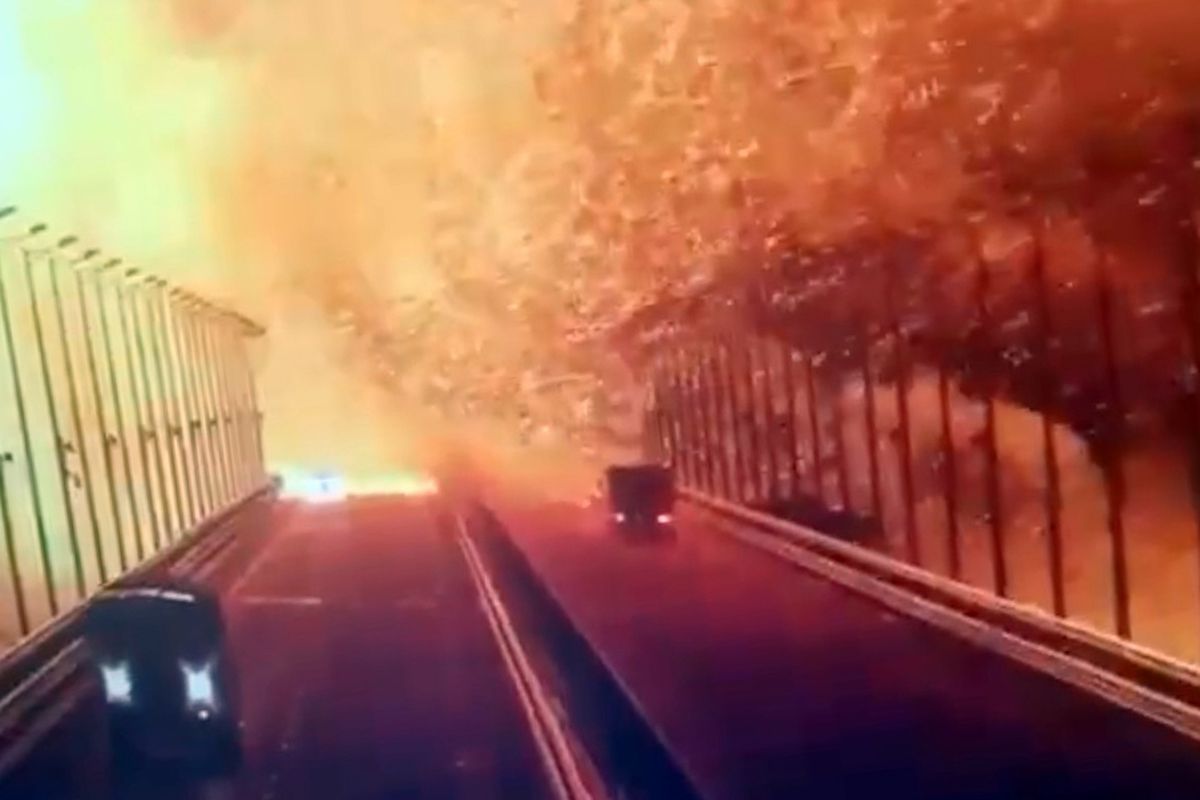 A truck bomb (see graphic video below) yesterday caused a fire and the collapse of a section of the Kerch Strait Bridge linking Russia to Crimea damaging a key supply artery for Moscow’s faltering war effort in southern Ukraine.

The speaker of Crimea’s Kremlin-backed regional parliament immediately accused Ukraine, though the Kremlin didn’t apportion blame. Ukrainian officials have repeatedly threatened to strike the bridge and some lauded the attack, but Kyiv stopped short of claiming responsibility.

The bombing came a day after Russian President Vladimir Putin turned 70, dealing him a humiliating blow that could lead him to up the ante in his war on Ukraine.  As reported by the Associated Press.

The Crimean Peninsula holds symbolic value for Russia and is key to sustaining its military operations in the south. If the bridge is made inoperable, it would make it significantly more challenging to ferry supplies to the peninsula. While Russia seized the areas north of Crimea early during the invasion and built a land corridor to it along the Sea of Azov, Ukraine is pressing a counteroffensive to reclaim them.

The bridge has train and automobile sections. Russia’s National Anti-Terrorism Committee specified that the explosion and fire led to the collapse of the two sections of one of the two links of the automobile bridge, while another link was intact.

Russia’s Energy Ministry said Crimea has enough fuel for 15 days, adding that it was working on ways to replenish stock.

Authorities suspended passenger train traffic across the bridge until further notice. Putin was informed about the explosion and he ordered the creation of a government panel to deal with the emergency.

The 19-kilometer (12-mile) bridge across the Kerch Strait linking the Black Sea and the Sea of Azov opened in 2018 and is the longest in Europe. It has provided an essential link to the Crimean Peninsula, which Russia annexed from Ukraine in 2014.

The $3.6 billion project is a tangible symbol of Moscow’s claims on Crimea. It was Russia’s only land link to the peninsula until Russian forces seized more Ukrainian territory on the northern end of the Sea of Azov in heavy fighting, particularly around the city of Mariupol, building a land corridor to Crimea earlier this year.

The speaker of Crimea’s Kremlin-backed regional parliament blamed Ukraine for the explosion, but downplayed the severity of the damage and said it would be promptly repaired.

“Now they have something to be proud of: over 23 years of their management, they didn’t manage to build anything worthy of attention in Crimea, but they’ve managed to damage the surface of the Russian bridge,” Vladimir Konstantinov, Chairman of the State Council of the Republic, wrote on Telegram.

The parliamentary leader of President Volodymyr Zelenskyy’s party on Saturday stopped short of claiming that Kyiv was responsible for the incident but appeared to cast it as a consequence of Moscow’s takeover of Crimea and attempts to integrate the peninsula with the Russian mainland.

“Russian illegal construction is starting to fall apart and catch fire. The reason is simple: if you build something explosive, then sooner or later it will explode,” David Arakhamia, the leader of the Servant of the People party, wrote on Telegram.

“And this is just the beginning. Of all things, reliable construction is not something Russia is particularly famous for…” he said.  Other Ukrainian officials were more celebratory while still stopping short of claiming responsibility. The secretary of Ukraine’s National Security and Defense Council, Oleksiy Danilov, posted a video in his Twitter with Kerch Bridge on fire on the left side and video with Marilyn Monroe singing her famous “Happy Birthday Mr. President” on the right side.

An advisor to Zelenskyy, Mykhailo Podolyak tweeted: “Crimea, the bridge, the beginning. Everything illegal must be destroyed, everything stolen must be returned to Ukraine, everything occupied by Russia must be expelled.

In Moscow, Russian Foreign Ministry spokeswoman Maria Zakharova said that “the reaction of the Kyiv regime to the destruction of civilian infrastructure shows its terrorist nature.”

In August, Russia suffered a series of explosions at an airbase and munitions depot in Crimea, which underlined its vulnerability.

The blast on the bridge occurred hours after explosions rocked the eastern Ukrainian city of Kharkiv early Saturday, sending towering plumes of smoke into the sky and triggering a series of secondary explosions.

Kharkiv Mayor Ihor Terekhov said on Telegram that the early-morning explosions were the result of missile strikes in the center of the city. He said that the blasts sparked fires at one of the city’s medical institutions and a nonresidential building. There were no immediate reports of casualties.

The blasts came hours after Russia concentrated attacks in its increasingly troubled invasion of Ukraine on areas it illegally annexed, while the death toll from earlier missile strikes on apartment buildings in the southern city of Zaporizhzhia rose to 17.

On Friday, the Norwegian Nobel Committee awarded the Nobel Peace Prize to human rights organizations in his Russia and Ukraine, and to an activist jailed in Belarus, an ally of Moscow.

Berit Reiss-Andersen, the committee’s chair, said the honor went to “three outstanding champions of human rights, democracy and peaceful coexistence,” though it was widely seen as a rebuke to Putin and his conduct of Europe’s worst armed conflict since World War II.

Putin signed documents on Wednesday to illegally claim four regions of Ukraine as Russian territory, including the Zaporizhzhia region that is home to Europe’s largest nuclear power plant, whose reactors were shut down last month.

That move was foreshadowed by Russia’s annexation of Crimea in March 2014, which was carried out after Moscow alleged residents of the peninsula had voted to join with Russia. That move was widely condemned, and prompted sanctions from the U.S. and the European Union.