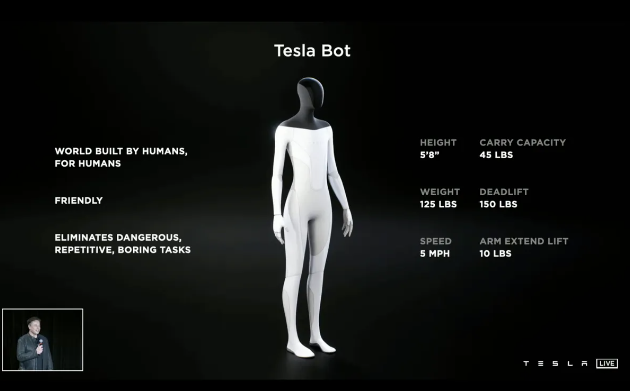 The Tesla Bot, also called Optimus, is expected to be deployed in factories and households. (Photo: Tesla)

Reuters is reporting that Tesla  is ramping up ambitious plans to develop the Tesla Bot, also known as Optimus, with internal meetings and hiring for about 20 positions including software and firmware engineers, deep learning scientists, actuator technicians, and internships.

“Tesla is on a path to build humanoid bi-pedal robots at scale to automate repetitive and boring tasks,” one job posting for a mechatronics technician stated. “Most importantly, you will see your work repeatedly shipped to and utilized by thousands of Humanoid Robots within our factories.”  (see video below)

Tesla posted most of the jobs under its Autopilot division, which is simultaneously working to deploy full self-driving capabilities for vehicles.

Elon Musk tweeted the Autopilot team has “end of month deadlines” for both the Tesla Bot and Autopark projects. Earlier in the summer, Musk teased that a prototype of the robot could be unveiled at Tesla’s AI Day on Sept. 30.

Musk’s vision for the five-foot-eight, 125-pound Optimus extends beyond the production lines of Tesla factories. He ultimately sees an army of robots tasked with household chores and care work in millions of households (see video below).

“This, I think, has the potential to be more significant than the vehicle business over time,” Musk said on an earnings call in January.

Some on Wall Street, however, are skeptical.

Investors and Tesla enthusiasts are still waiting on the Cybertruck, due out in 2023 after several delays, as well as the company’s promise of fully autonomous vehicles. The EV maker expanded its Full Self-Driving (FSD) Beta pilot to 160,000 Tesla owners as it scales its autonomous software program, though some have said the current $15,000 price tag isn’t worth its current capabilities.

Musk has also touted an automated robotaxi concept, which is slated to be announced in 2023

And with deploying robots at scale, there are other challenges in the way of deployment.

A number of companies have sought to develop humanoid robots — Hyundai’s Boston Dynamics, Honda, GM and NASA, Ford, Softbank, and others — though few projects have gotten off the ground.

According to Reuters, the robots have had trouble overcoming unexpected situations and completing unscripted tasks, much like self-driving cars.

Musk has a history of success.  I don’t think it is a question of whether he will deliver Optimus but when?  Maybe we will see on September 30th!