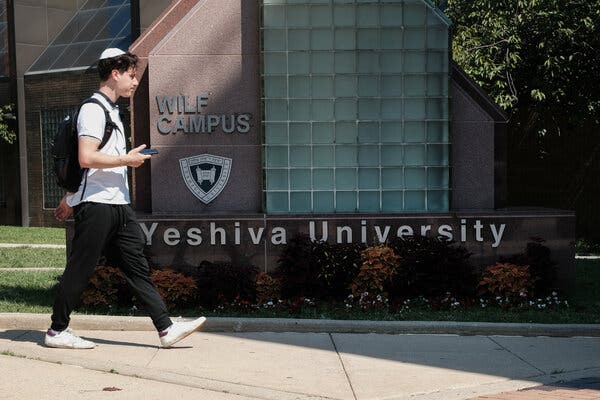 The U.S. Supreme Court in a 5-4 vote declined on Wednesday a request from Yeshiva University to block a lower court order that requires the university to recognize a “Pride Alliance” LGBTQ student club.

“The application is denied because it appears that applicants have at least two further avenues for expedited or interim state court relief,” the court said.

“I see no reason why we should not grant a stay at this time,” he said.

Noting that the school objected to recognizing a group that would have implications that are not consistent with the Torah, Alito said, “The First Amendment guarantees the right to the free exercise of religion, and if that provision means anything, it prohibits a State from enforcing its own preferred interpretation of the Holy Scripture.”

“The upshot is that Yeshiva is almost certain to be compelled for at least some period of time (and perhaps for a lengthy spell) to instruct its students in accordance with what it regards as an incorrect interpretation of Torah and Jewish law,” Alito continued.

He said that a state’s imposition of its “own mandatory interpretation of scripture is a shocking development that calls out for review,” and added that “it is our duty to stand up for the Constitution even when doing so is controversial.”

Justice Sonia Sotomayor — who has jurisdiction over the lower court — had temporarily blocked the order last week, a move meant to give the full court more time to act.

The court’s order is a rare loss, for now, for supporters of religious liberty at the Supreme Court.

Last term, the court’s conservative majority ruled in favor of religious conservatives in two cases. In addition, in 2021, the court sided with a Catholic foster care agency that refused to consider same-sex couples as potential foster parents.

Alito has repeatedly called for greater protections for the free exercise of religion including during a July speech in Rome. “Religious liberty is under attack in many places,” Alito said.

In ruling against Yeshiva, a trial judge focused on whether the university qualified as a religious corporation within the meaning of the New York City Human Rights Law (NYCHRL), a public accommodation regulation that bars discrimination based on sexual orientation. The law expressly excludes certain religious corporations and Yeshiva argued that it fell under the exception.

The court noted, however, that according to an amendment to the school’s charter that was adopted in 1967, the university is considered an “educational corporation.”

“Yeshiva’s organizing documents do not expressly indicate that Yeshiva has a religious purpose,” Judge Lynn R. Kotler said in holding that Yeshiva is not exempt from the law.

The court also rejected the school’s claims that the NYCHRL violates Yeshiva’s First Amendment Rights, holding that the public accommodations law is a neutral law with general applicability to all parties.

“It does not target religious practice, its intent is to deter discrimination, only, and it applies equally to all places of public accommodation other than those expressly exempted as distinctly private or a religious corporation organized under the education or religious law,” Kotler wrote.

The judge said that the challengers sought “equal access” and that the school “need not make a statement endorsing a particular viewpoint” and also noted that some of Yeshiva’s graduate schools allow LGBTQ groups, undercutting the university’s arguments.

In court papers filed with the Supreme Court, the school argued that the lower court opinion represents an “unprecedented intrusion into Yeshiva’s church autonomy” and argues that as “a deeply religious Jewish university, Yeshiva cannot comply with that order because doing so would violate its sincere religious beliefs about how to form its undergraduate students in Torah values.”

Lawyers for the Becket Fund for Religious Liberty, representing Yeshiva, said that the lower court’s order is an “unprecedented” intrusion into the university’s religious beliefs and a clear violation of Yeshiva’s First Amendment rights.

“The Torah guides everything that we do at Yeshiva—from how we educate students to how we run our dining halls to how we organize our campus,” Ari Berman, president of Yeshiva University, said in a statement before the court acted. “We care deeply for and welcome all our students, including our LGBTQ students, and continue to be engaged in a productive dialogue with our Rabbis, faculty and students on how we apply our Torah values to create an inclusive campus environment. We only ask the government to allow us the freedom to apply the Torah in accordance with our values.”

A lawyer for the current and former students behind the challenge — who won in the lower court — argued that it was premature for the Supreme Court to step in now because New York appellate courts have yet to rule on the merits and the state law issue has not been fully resolved.

“Not only do Applicants leapfrog the entire state appellate process, but they also press the Court to address both novel and weighty First Amendment questions on a rocket docket without the benefit of full briefing or oral argument,” lawyer Katherine Rosenfeld told the justices in court papers.

Rosenfeld said that the lower court ruling “simply requires” the university to grant the “Pride Alliance” access to the same facilities and benefits as its “87 other recognized student groups.”

“This ruling does not touch the University’s well-established right to express to all students its sincerely held beliefs about Torah values and sexual orientation,” Rosenfeld said.

Jillian Weinberg, a student at Yeshiva’s Ferkauf Graduate School of Psychology, told CNN in an interview that that Ferkauf recognizes LGBTQ groups, even if Yeshiva’s undergraduate school does not.

She said that Ferkauf’s faculty and students “are concerned about the harm that President Ari Berman’s actions will cause to the mental health and well-being of LGBTQIA+ students and faculty.”

The New York Court of Appeals has agreed to hear an appeal to the ruling this fall but refused to put the trial court’s ruling on hold, prompting school officials to petition the high court.

We have not seen the end of this!