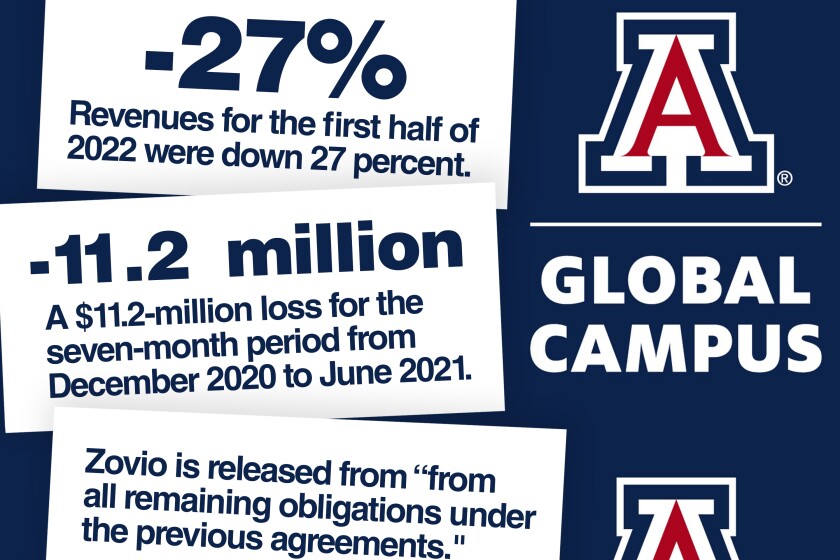 Illustration by The Chronicle of Higher Education

The news marks a precipitous end for the original deal, Arizona acquired Zovio’s Ashford University in 2020 and created the University of Arizona Global Campus, a nonprofit organization affiliated with the traditional public university. The new online mega-university was intended to extend the flagship university’s reach, particularly into the market of working adults. And both parties anticipated that Zovio would furnish UAGC with online program management (OPM) services for much of the next decade.  As reported  by The Chronicle of Higher Education.

Despite the lucrative terms of that 2020 sale — including an upfront cash payment of $37.5 million by Zovio and a promise that UAGC’s academic expenses would be covered with tuition and fee revenue — both Zovio and UAGC struggled in the wake of the deal to generate profitable returns. UAGC reported an $11.2-million loss in its most recent filing to the Internal Revenue Service, for the seven-month period covering December 2020 to June 2021. The institution also temporarily lost the ability in April 2022 to offer military education benefits provided by the U.S. Department of Veterans Affairs.

Meanwhile, Zovio struggled to distance itself from the reputational and legal fallout associated with its time running Ashford University, a for-profit institution. Despite a rebrand, potential investors and university partners remained wary. In February, UAGC’s accreditor recommended the university routinely undertake assessments of any risks resulting from its contractual relationship with Zovio. A month later, a California judge imposed a $22-million fine against the publicly traded company after determining Ashford had misled students, a penalty Zovio promised to appeal. And in May, Zovio announced a strategic review of its operations to “turnaround the company” — an analysis resulting in the $55-million sale of Zovio’s TutorMe business. That review continues.

Compounding the challenges for Zovio? Fewer than expected military-affiliated students recruited or retained in the second quarter of 2022 by the company and UAGC, Randy Hendricks, Zovio’s chief executive, said in an earnings report last week. All told, OPM-generated revenues for the first six months of 2022 were down 27 percent relative to the same period in 2021 — a $36-million drop.

“As we looked at the time and capital it would take to get to a profitable contract, that wasn’t something that we were in a position to do,” Hendricks said.

The acknowledgement by Hendricks represents a significant departure from the statements made by Zovio two years ago when it announced plans to transfer Ashford to the University of Arizona. Zovio also anticipated the deal in 2020 would allow the company to pursue “diversified growth as a provider of technology and services to other institutions, corporations, and learners.” In the same news release, Robert C. Robbins, Arizona’s president, promised “the accessibility and innovative approach of the University of Arizona Global Campus will help a new generation of Wildcats find success.”

But come February 2022, Robbins would raise the prospect of Zovio’s no longer being a party to the OPM contract that the university and the company had worked out two years earlier. At the same time those remarks were given, the university also announced plans to eventually absorb the online-education operations held and controlled by UAGC into its own publicly held apparatus.

As part of the deal announced last week handing over management of online programs from Zovio to UAGC, UAGC assumed all of the obligations associated with that business. The university also took over the lease of Zovio’s location in Chandler, Ariz. In connection with the sale, Zovio also paid $10.5 million to UAGC to settle its remaining liabilities to the university. All told, Zovio booked $35.9-million in expenses as a result of the deal.

Beyond those terms and conditions, the deal also grants UAGC greater flexibility over the operations that will determine whether the mega-university succeeds or fails, said Phil Hill, a partner at the ed-tech consultancy MindWires. And Hill speculated that UAGC would eventually need to secure significant financing — perhaps via a bond issuance or from the University of Arizona directly — in order to give the venture the best chance for success.

The fits and starts associated with the now-defunct Arizona-Zovio arrangement are likely to deter future mega-university aspirants from using its particular nonprofit conversion/residential OPM model to achieve desired enrollment gains, Hill said. The lack of a clean break between UAGC and Zovio after 2020 created a plethora of managerial and reputational challenges for the university as it sought to stand up its online-education operations, Hill said. And those challenges would have grown only more unwieldy for the University of Arizona had Zovio found any other buyer besides UAGC to take over its OPM responsibilities.

Alternatively, the contractual protections that UAGC secured from Zovio in 2020 most likely complicated any efforts by the already reputationally damaged company to find a buyer for itself or its OPM business as Zovio’s finances deteriorated.

“Nobody else wanted this. This was a business that was going away. It was a question of ‘how does it go away?’ So I’m not surprised that no financial buyers or competitor-OPMs were interested in buying it,” Hill said.

Indeed, after selling its Ashford business to UAGC in 2020, Zovio’s stock price would eventually crest at $6.58 a share in February 2021. But since the start of the year, the company’s share price has never exceeded $1.50. And at the closing bell last Monday, an investor could buy a single share of Zovio’s stock for 67 cents.

Now, Hill says, it’s all on the University of Arizona and UAGC to make its mega-university aspirations a reality. “You can’t blame Zovio anymore,” Hill said.

“In the short term, it’s bad.” Hill said. But in the long term, it’s up to Arizona to “turn this around.”

I thought the original deal between the two was problematic given Zovio’s association with Ashford University.