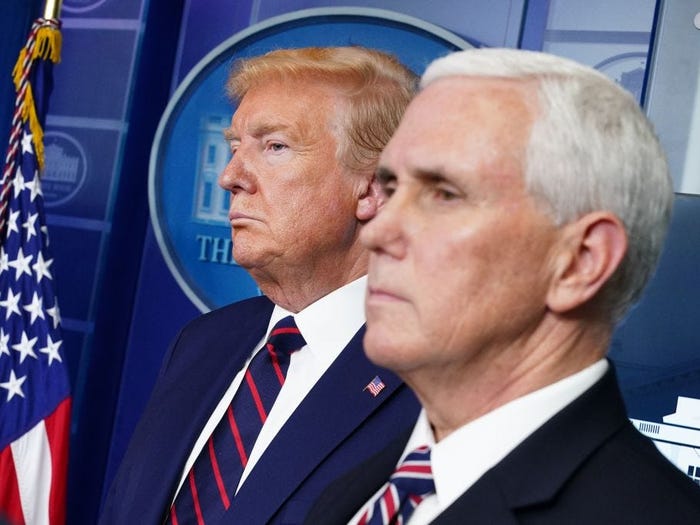 Mike Pence and Donald Trump  will hold dueling rallies in Arizona on Friday as they stump for rival candidates who offer dramatically different visions of the Republican Party in a critical battleground state. Days later, they will once again cross paths as they deliver major speeches on the same day in Washington.

The encounters mark a more confrontational phase in the fraught relationship between the former running mates and once close confidantes who could soon find themselves competing against one another in the 2024 GOP presidential primary if they both ultimately choose to run.  As reported by the Associated Press.

“I think this is a continuation of the larger message that Pence is trying to embody here, which is the Republican Party should look to the future,” said Scott Jennings, a longtime party strategist. “This is going to be the existential question for the Republican Party: Are we going to listen to a slightly different view than Donald Trump’s? Right now, the standard-bearer for this is Mike Pence.”

That description marks a striking turnaround for Pence, who spent his four years in the White House as Trump’s most loyal defender. But Trump turned on his vice president when Pence refused to go along with his unconstitutional efforts to overturn the results of the 2020 election, putting Pence in the crosshairs of a violent mob on Jan. 6.

Now Pence, who has repeatedly defended his actions that day, is taking a more active effort to shape the future of the party. This week, Pence endorsed Karrin Taylor Robson in Arizona’s Republican gubernatorial primary, pitting himself against Trump, who has endorsed Kari Lake, a former newscaster who has embraced Trump’s election lies.

“As Arizona Democrats pursue the reckless Biden-Harris agenda, Karrin Taylor Robson is the only candidate for Governor that will keep Arizona’s border secure and streets safe, empower parents and create great schools, and promote conservative values,” Pence said in a statement announcing his decision.

Pence backed Georgia Gov. Brian Kemp, a top Trump target who easily defeated the former president’s hand-picked challenger this spring. But Pence’s Arizona move showed a willingness to weigh in on a closer and open race in alliance with the state’s outgoing GOP governor, Doug Ducey, who also rebuffed Trump’s efforts to overturn the election.

Pence is planning to campaign with Robson in Phoenix and southern Arizona Friday — the same day that Trump is set to headline a rally for Lake that was rescheduled after the death of his first wife, Ivana Trump.

A Trump spokesperson did not respond to requests for comment on the events.

Trump and Pence will again cross paths next week as the former president returns to the nation’s capital for the first time since leaving the White House. Pence will address the conservative Heritage Foundation on Monday evening and will speak at the Young America’s Foundation’s annual National Conservative Student Conference on Tuesday morning. That afternoon, Trump will headline a two-day summit organized by the America First Policy Institute.

Pence will use his speech before the Heritage Foundation to highlight the policy agenda he released earlier and talk about the future of the party, according to aides. The remarks are expected to offer an implicit contrast with Trump, who has spent much of his energy since leaving office on relitigating the 2020 election.

Pence has urged Republicans to move on, even as he continues to tout the accomplishments of what he often describes as the Trump-Pence administration.

Pence’s efforts come as Trump is preparing to launch a third campaign for the White House as soon as this summer while he faces a flurry of investigations into his efforts to cling to power. That includes the House Jan. 6 committee, which on Thursday will hold another prime-time hearing, this time spotlighting Trump’s refusal to call off the angry mob that stormed the Capitol and sent Pence and other lawmakers into hiding.

While polls show Trump remains the overwhelming favorite in a hypothetical GOP primary, Marc Short, Pence’s former chief of staff and a top adviser, argued that even if Trump does announce a run, that doesn’t necessarily mean he’ll be on the ballot two years from now.

“As the committee winds down, I’m sure he’s looking for a reset that brings attention back on him. And an announcement does not necessarily mean a commitment at the end of that process to continue forward,” said Short. “I don’t think there’s any doubt that the president enjoys being the center of attention. And the announcement puts even additional media focus on him.”

Trump, meanwhile, has continued to slam Pence for refusing to go along with his scheme to remain in power. At a gathering of Evangelical Christians in Nashville, Tennessee, last month, Trump again said Pence “did not have the courage to act,” drawing applause.

When it comes to a potential race, Trump does not see Pence as a threat, according to allies, who are much more consumed with Ron DeSantis. The Florida governor is increasingly seen by conservatives as a natural and younger successor to Trump’s MAGA movement who can channel the same anger, but with less baggage.

Jennings, meanwhile, praised Pence for being willing to stand up to Trump when so many others in the party still refuse to cross him.

“What Mike Pence is doing is extremely valuable. And whether he is a viable candidate for present, I don’t know. But he’s certainly earned the right to make the case for a post-Trump future,” said Jennings.

“He may end up being John the Baptist to someone else,” he added. “Headless but remembered well.”