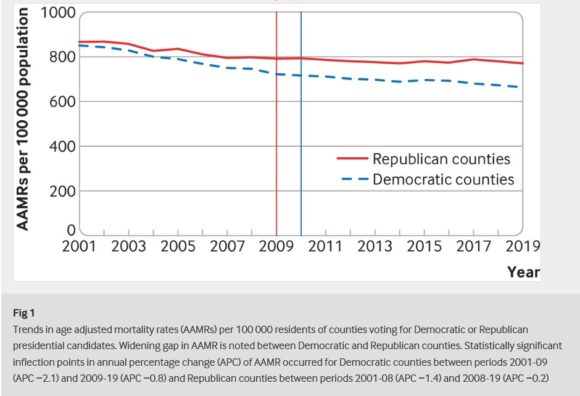 A new study found deaths rates are improving faster in Democratic counties than Republican ones.

Experts are calling this phenomenon the “mortality gap,” and say state policies, individual health decisions and a shift in party demographics may be widening it.

Researchers from Brigham and Women’s Hospital looked at mortality rates using data from the Centers for Disease Control and Prevention and the Massachusetts Institute of Technology, and compared them to federal and state election data from 2001 to 2019.

The team compiled data from more than 3,000 U.S. counties in all 50 states and found mortality rates decreased by 22% in Democratic counties but dropped only 11% in Republican counties, according to the study published Tuesday in the British Medical Journal (see graph above).

“We wanted to see whether the political affiliation had an association with death rates in the U.S.,” said corresponding author Dr. Haider Warraich, associate physician at Brigham and Women’s Hospital and assistant professor at Harvard Medical School. “Over these two decades, the mortality gap between Republican and Democratic counties has really widened quite considerably.”

Mortality rates in Democratic counties dropped from 850 deaths per 100,000 people to 664, but in Republican counties, mortality rates declined from 867 to 771. The mortality gap widened across leading causes of death in the U.S. including heart disease, cancer, drug overdoses and suicide.

But when Warraich and colleagues stratified the data by race and ethnicity, they found there was little difference between the improvements in mortality rates of Black and Hispanic residents in Democratic and Republican counties.

Although Black and Hispanic Americans in Republican counties saw greater reductions in mortality rate compared to their white counterparts, the study still found Black residents experienced an overall higher mortality rate than any other race and ethnicity, regardless of the county’s political leaning.

“These data can open people’s eyes to the fact that policy matters and it’s having a real effect on people’s lives,” he said.

“From what we’ve seen over time, many health behaviors have become divided over political lines,” Warraich said. “Democratic-leaning people are more likely to accept vaccination, practice social distancing, and more likely to engage in healthier habits.”

The widening gap may also be due to a shift in party base, said Dr. Peter Muennig, professor of health policy and management at Columbia University Mailman School of Public Health, who is not affiliated with the study.

“The takeaway is that we’re seeing social shifts that mean that the Democratic party is increasingly pulling in healthier people and the Republican party is pulling in sicker people,” Muennig said.

Although the study period ended before the pandemic, health experts worry the coronavirus may have further widened the mortality gap between Republican and Democratic counties.

In another study published Monday in Health Affairs, a team led by University of Maryland researchers found majority-Republican counties experienced 73 more COVID-19 deaths per 100,000 people compared to their Democratic counterparts.

Although the studies highlight an ideological divide, health experts hope they can bring lawmakers from both sides together to improve health outcomes.

“It’s my hope that this paper instead of further widening the partisan divide can actually sensitize people in wanting to come together for a common cause,” Warraich said. “That common cause being that we all want to live long and healthy lives.”