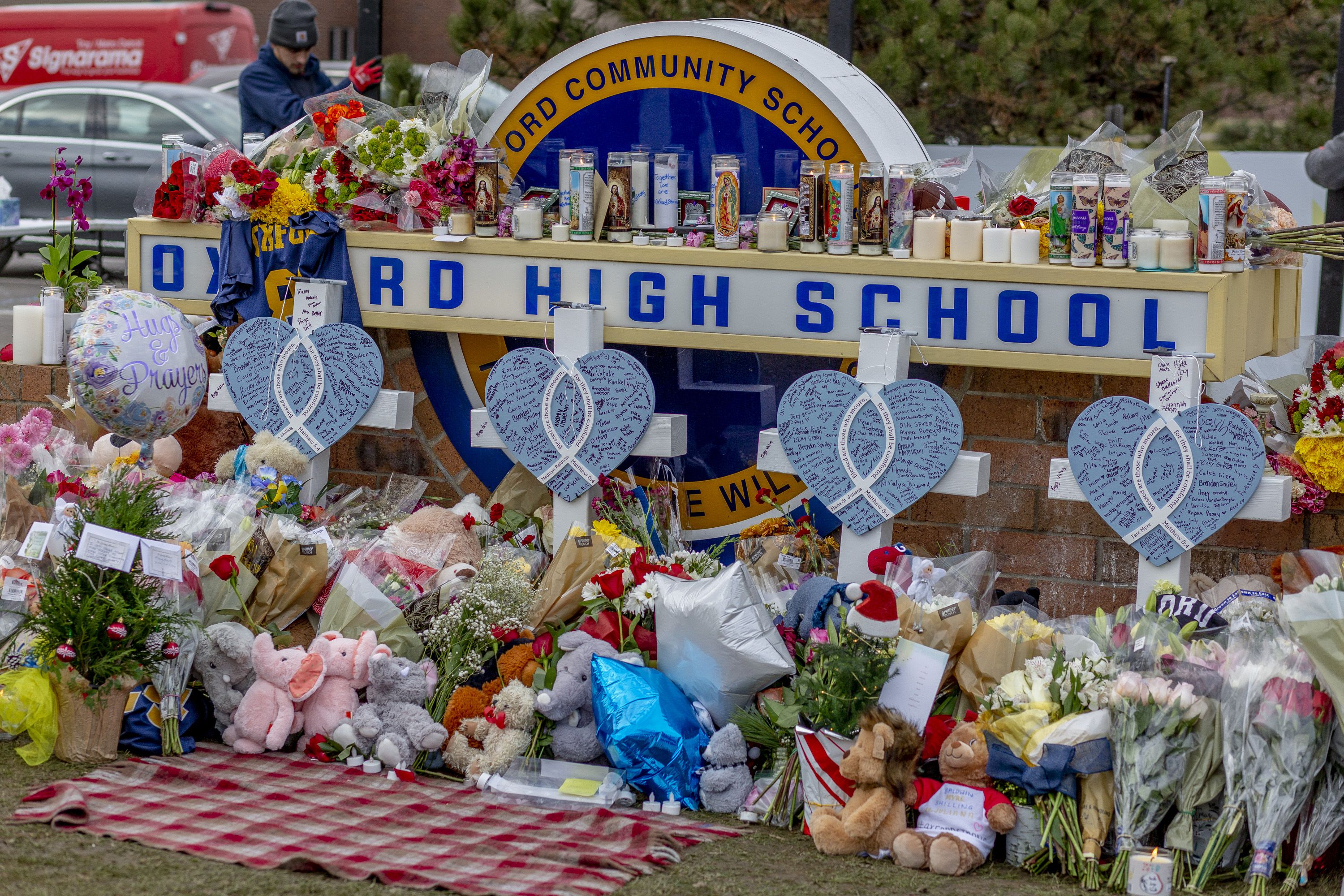 In the aftermath of the tragedy at Oxford High School on Tuesday, November 30th, legal experts are asking whether school officials should be held accountable.

Prior to the Shooting

On Monday, November 29th, a teacher saw the suspect looking at photos of ammunition on his cell phone during class, which prompted a meeting with a counselor and another staff member. During that discussion, the student told them that he and his mother had recently gone to a shooting range and that “shooting sports are a family hobby,” Oxford Community Schools Superintendent Tim Throne wrote in the letter.
The school tried to reach the student’s mother that day, but didn’t hear back until the following day when his parents confirmed the student’s story, Throne said.
After school officials reached out to Jennifer Crumbley regarding her son searching the web for ammunition, she texted him saying, “LOL I’m not mad at you. You have to learn not to get caught,” prosecutors have said.
Then on Tuesday — the day of the shooting — a teacher alerted school counselors and the Dean of students to “concerning drawings and written statements” that the student had created, according to the letter. He was “immediately removed from the classroom” and taken to a guidance counselor’s office, Throne explains.
The student told a school counselor that “the drawing was part of a video game he was designing and informed counselors that he planned to pursue video game design as a career,” Throne said.
Following that discussion, the student stayed in the office for an hour and half as school staff called his parents and waited for them to arrive to the school, the letter noted. While waiting the student said he was concerned about missing his homework assignments and “requested his science homework, which he then worked on while in the office,” the letter said.
“At no time did counselors believe the student might harm others based on his behavior, responses and demeanor, which appeared calm,” Throne said.
Upon the parents’ arrival, the school counselors asked the student “specific probing questions” about his potential for self-harm or harm toward others, Throne said. The answers he provided “led counselors to again conclude he did not intend on committing either self-harm or harm to others,” according to the letter.
School counselors told the parents they must seek counseling for their son within 48 hours, otherwise the school would contact Child Protective Services, Throne wrote.
When asked to take their child home for the rest of the day, Throne said the student’s parents “flatly refused,” leaving their son behind to “return to work.” And because the student had no prior disciplinary actions on his record, school counselors decided to allow him to return to his class, rather than send him to what they thought would be an empty home, Throne explained.
“While we understand this decision has caused anger, confusion and prompted understandable questioning, the counselors made a judgment based on their professional training and clinical experience and did not have all the facts we now know,” he said.
Throne noted the decision to send the student back to class was not shared with the principal or assistant principal.

Karen McDonald, the Oakland County prosecutor who is leading the case, has said Crumbley allegedly had the gun used in the shooting in his backpack during the meeting with school officials and his parents.
In his letter, Throne said he does not know whether or not the gun was in the student’s backpack as it “has not been confirmed by law enforcement to our knowledge nor by our investigation at this time.”
The alleged shooter started firing a gun “during passing time between classes when hundreds of students were in the hallway transitioning from one classroom to the other” on Tuesday, Throne said.
“Before the shooter was able to walk a short distance to enter the main hallway, students and staff had already entered classrooms, locked doors, erected makeshift barricades and locked down or fled according to their training,” Throne explained. “The suspect was not able to gain access to a single classroom.”
An initial review of videos of the shooting shows that “staff and students’ response to the shooter was efficient, exemplary and definitely prevented further deaths and injuries,” Throne said.

School officials met with Mr. Crumbley, 15, and his parents, informing them that he needed to begin counseling within 48 hours. After his parents resisted bringing him home, administrators allowed him to stay in school.

Shortly afterward, Mr. Crumbley fatally shot four students, according to the prosecutor in Oakland County, Mich., who laid out that stunning series of events on Friday while announcing involuntary manslaughter charges against the parents.

Now, Oxford High School’s actions are also under a microscope, prompting questions about the school’s responsibility, and whether there could be legal repercussions for administrators. Asked if her office was looking into the conduct of school officials, Karen M. McDonald, the prosecutor, said, “The investigation is ongoing.”  Below is an excerpt of an analysis published yesterday in The New York Times.

It was well within the school’s rights to require Mr. Crumbley, who has since pleaded not guilty to murder and terrorism charges, to leave campus, Professor Ross said.

If the parents refused to take Mr. Crumbley home, it was the legal and ethical responsibility of the school, Professor Ross said, to “remove the student from the classroom and put them in a safe place — safe for other people and safe for themselves.”

School officials have defended their actions. In a videotaped statement posted online on Thursday, the superintendent of Oxford Community Schools, Tim Throne, said that Mr. Crumbley had no disciplinary history. “No discipline was warranted,” Mr. Throne said. “There are no discipline records at the high school.”

But Ms. McDonald suggested there were unanswered questions.

When asked whether the school staff should have reported Mr. Crumbley right away to law enforcement, she said: “Any individual who had the opportunity to stop this tragedy should have done so. The question is what did they know and when did they know it.”

Chris Dorn, a school safety consultant with the nonprofit Safe Havens International, said it was advisable for schools to call law enforcement if there was suspicion that a student might be armed.

Mr. Dorn has conducted investigations into lapses that led to past school shootings, finding that administrators sometimes worry that calling the police will violate a student’s rights. Other times, they have simply failed to take a threat seriously enough.

“Part of it is that people are just generally non-confrontational,” Mr. Dorn said. “School staff are often slow to recognize danger because it’s not part of their everyday.”

While Oxford High School conducted active shooter drills several times per year, “There is a lot of focus on responding to the active shooter, but not necessarily on the prevention for them,” he added.

It is historically very challenging to hold a school district legally responsible for a shooting, said Chuck Vergon, a professor of education law at Youngstown State University.

A majority of past school shooting cases featured some kind of warning in advance of potential violence, he said. But it is difficult in most state courts to meet the required standard of proving gross negligence on the part of school officials — that they acted in “wanton and willful disregard” for the safety or well-being of others, he said. “That standard has usually shielded school officials in most school shooting cases from civil liability.”

But the Oxford school system will most likely face years of litigation over the shooting, if recent history is any guide.

“I definitely think that there’s going to be a lawsuit,” said Mike Kelly, a lawyer in Northville, Mich., who specializes in representing students who face school expulsion — including one student who recently faced expulsion by another Michigan district for having a hunting rifle in the car he parked on school grounds.

“There is some culpability and responsibility here on the part of the school,” Mr. Kelly said.

In one notable case, when a substitute teacher was told of a threat but failed to take action, the insurance company for Marysville School District in Washington paid $18 million to the families of four dead students, as well as to one student who was injured.

In 2018, a judge in Connecticut threw out claims filed by the parents of two victims of the 2012 Sandy Hook massacre, in which 20 first graders and six adults were killed. The judge concluded the school district was immune from such lawsuits.

This year, schools in Broward County, Fla., reached a $25 million settlement with both survivors and families of the victims of the shooting at Marjory Stoneman Douglas High School in 2018, which left 17 people dead and another 17 wounded. The settlement followed a court decision capping the school system’s liability at $300,000 had the victims won at trial.

In the Michigan shooting, a potential lawsuit would probably turn on the question of whether the school took strong enough action to protect students after a teacher happened to see Mr. Crumbley’s disturbing drawing, which included a gun, a person who had been shot and a plea for help.

The fact that Mr. Crumbley was said to have no disciplinary record creates what Mr. Kelly called “a gray area” and could become pivotal in any lawsuit claiming the school was culpable because it failed to remove him from campus.

But she said that the steps to prevent gun violence begin far before someone brings a weapon onto school grounds. Ultimately it is lawmakers, not school officials, she argued, who have the power to prevent shootings by passing secure gun storage laws or red flag laws, which allow the police to temporarily confiscate firearms from people who are deemed by a judge to be a danger to themselves or others.

“You’re putting educators in an impossible position because they don’t really have the tools to proactively prevent guns from coming into the school,” Ms. Watts said.

As indicated in the Times analysis above, it is likely that the school district and officials will face a lot of litigation in this matter.